When it comes to cheese everyone has a favorite. Speaking with Jeff Mauro recently I found that his was aged cheddar. Most of my kids love Muenster (so do I!), but my all-time favorite-hands-down cheese is goat's milk.

I really can't recall the first time I had it, I wish I could, but I do know for years and years it's been the one I can never get enough of. It seems that the youngest of my 3 children can't get enough either. The cost for that many of us is so prohibitive that it's become a once-in-a-while treat.

We made a short trip to get raw milk a couple days ago and on this trip I also found raw goat's milk for a very nice price: $2.50 for a half gallon. I bought it with my cow's milk and fresh eggs and came home wondering why on earth I'd bought it.  Did I really think the kids would drink it? Would I drink it?

I did drink a small amount and found that the particular milk that I'd bought wasn't "goaty" like I expected. I'd hear horror stories about the taste and smell and expected something not-so-good (which made me wonder even more why I'd bought it!), but was pleasantly surprised to find it slightly sweet and smooth like cow's milk.

Now, what to do with it? There's no way I would drink a half gallon myself and the kids kept turning up their cute little noses at it. Then it hit me ... cheese, glorious cheese! Yes. I looked up many recipes on the internet and consulted a book or two before venturing forth.

I found that 5 quarts of milk will yield a pound of cheese, so I didn't expect a whole lot from my half gallon. I also wasn't thoroughly convinced that I could make cheese of any type (beyond yogurt cheese), so I channeled my great-grandfather the cheese maker and got to work. Oh, yes - my great-grandfather on my paternal grandmother's side was a cheese maker! Look, here's a shot and info from a census in Canada:


Now that our ancestry lesson for the day is over ... on to making goat cheese! There are conflicting recipes out there and some use chevre cultures and some do not. Some heat to 72 degrees F and others higher. Some add acid while the milk is over heat, others don't. This recipe results in something closer to ricotta and less like chevre bought at the store. This is the method I chose for my first time out, I'll be doing this again with different methods to determine which I like best.

I'm not writing up a full printable recipe, the photos and instructions should be enough. Do start with:

This CAN be halved! Most recipes on the web call for just a quart of milk and a 1/4 cup of lemon juice. 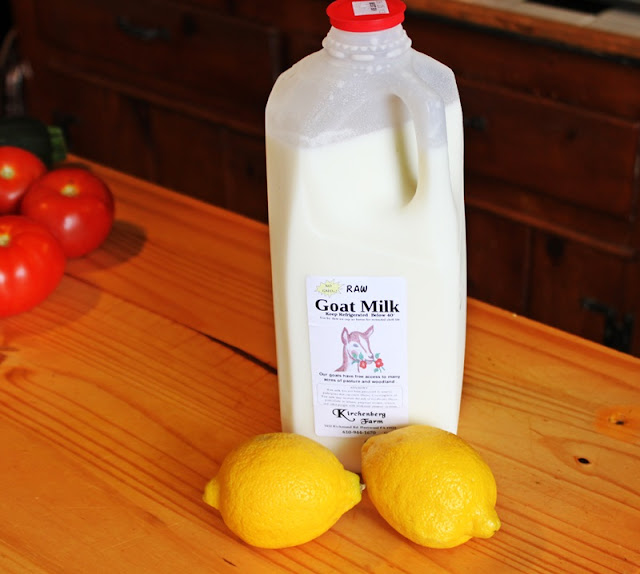 Start with fresh goat's milk. It doesn't need to be raw, just fresh. Pasteurized is fine as well, but not ultra-pasteurized. Have a source of acidity - I used lemon juice and you can use citric acid, though I've lost the amounts for that so I'm unsure. 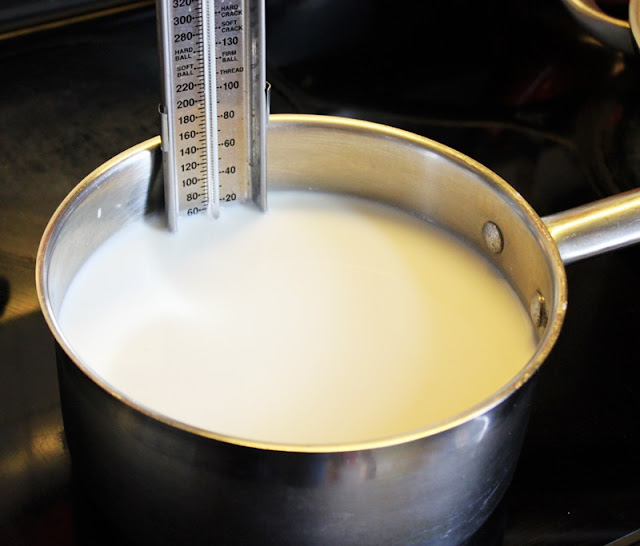 Put the milk into a non-reactive pot. This means stainless steel, glass or ceramic. The other metals will have an effect on the cheese making process, so don't use them. Add a thermometer. I used a candy thermometer because it attaches to the pan and I don't have to check and recheck each time I want to know what the temperature of the milk is. 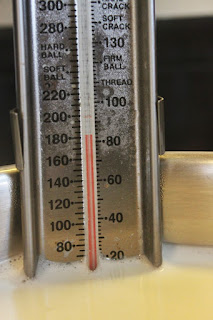 Heat the milk over medium heat until it reaches 185 degrees F. 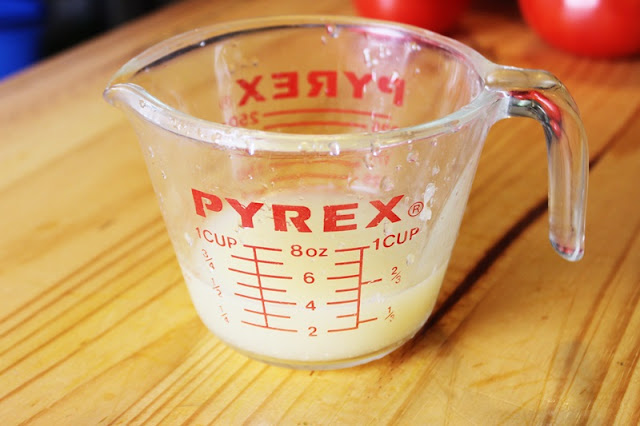 Remove pan from heat and stir in lemon juice. Stir until tiny curds begin to form. These do not look like large soft curds you would get with cow's milk, they are very tiny, but they DO form a cheese. Let stand for 15 minutes or so to be sure all curds have formed. 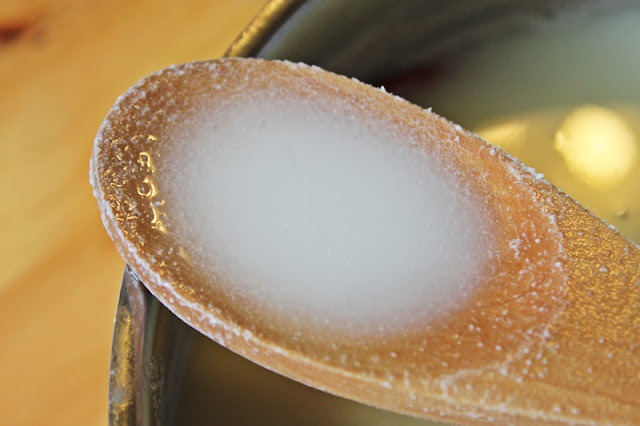 Sometimes the curds are larger and softer, but I have found that these tiny curds make cheese just as well, as you will see. I really worried at this part, but it did work! 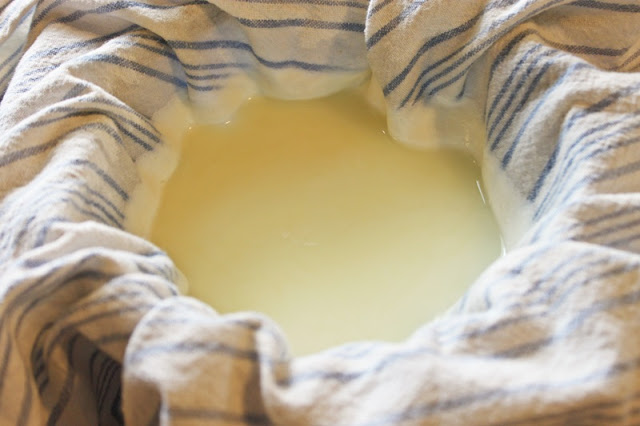 Set a mesh strainer or colander over a bowl or pot and line with fine muslin or any clean and thin tea towel. Cheesecloth is too large for this and the tiny curds will fall through. Ladle in the curds and whey and let stand for 15 minutes. I had to do this slowly because I used a half gallon of milk which was a larger volume than my strainer and tea towel was able to withstand all at once. You can see the curds clinging to the towel as the whey pours through the strainer. 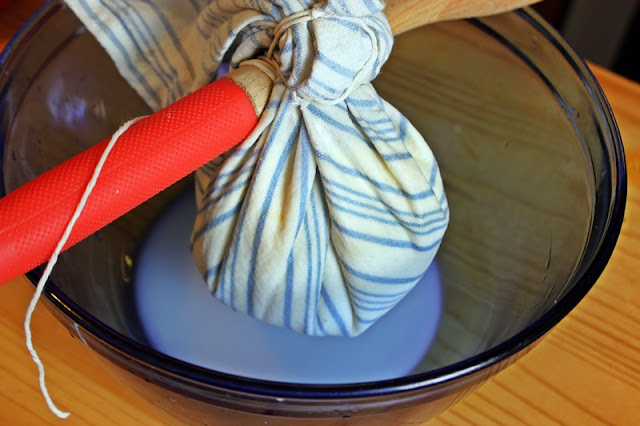 Fold the towel up around the cheese and secure with twine to anything that will hold it above your bowl or pot. Let drain for several hours at room temperature until no liquid is released when you gently squeeze the bag. 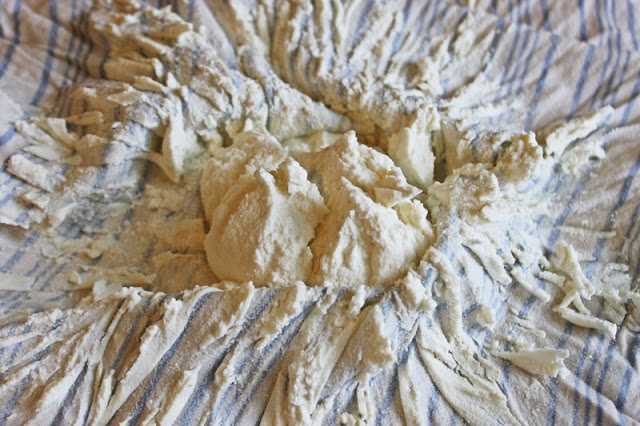 Untie and open the towel to reveal your cheese. 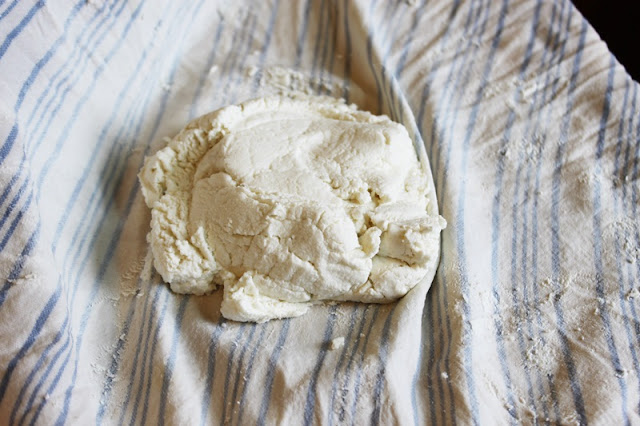 Use a rubber spatula to scrape all the cheese to the center of the towel.

Put into a bowl and add salt and herbs or garlic or other seasonings as desired. 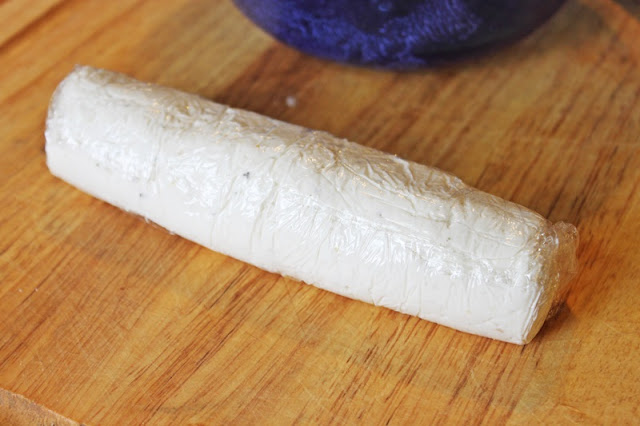 Set cheese onto plastic wrap and roll into a log. Refrigerate for an hour or until you're ready to eat! Let stand at room temp for about 15 minutes before consuming. This will last a week in the refrigerator, keep covered well. I was able to get an 8 ounce log from a half gallon of milk so a full gallon should yield nearly a pound!