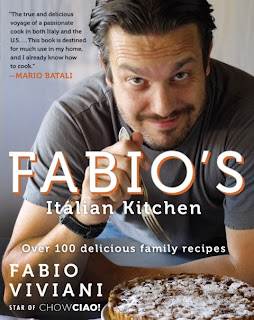 I think I'm a fairly lucky person. I've had my fair share of opportunities that seem to have nothing to do with anything but sheer luck. I'm not saying I don't have talents or abilities that people might find desirable  but a lot of my blogging work and connections seem to have been complete flukes.

I have a feeling Saturday was that way, as well. I know I can write a cookbook or restaurant review fairly well, but to have been invited to meet with Chef Fabio Viviani was something I didn't think would happen again in my lifetime, much less right now in my career as a blogger.

Nonetheless, I leapt at the offer. Fabio has long been a favorite in our household and after meeting him at the NYCWFF in 2010 and reconnecting through emails and Twitter as he found his footing online, it just solidified the fact that I truly admired him.

I had the chance to sit with Fabio and discuss a few things with him about his newest cookbook, Fabio's Italian Kitchen (due out April 23rd, Hyperion) and newest restaurant endeavor Siena Tavern, in Chicago.

I couldn't stick to the usual questions, because I had so many for him and so little time. What I really wanted to do was ask him to tell his life story, but I had to try and stay in the present. So, my first question for him was, if he was so successful in Italy, why leave it all behind and come here? His answer surprised me, "I wasn't happy." He then said this, which explained it all very well, "Success is not measured by how much you have or how much money you make, but how happy you are." Indeed. So I asked him if he was happy now and he simply said, "Happy? Yes. Much happier than I was in Italy, but not fulfilled yet."

I think he's on the right track. I think leaving yourself open to be happier and more fulfilled just gives you the drive to succeed even further, which is another thing he pointed out. It's a person's drive to succeed that gets them there, but they have to be willing to take the steps and not just expect to be what they wanted to be immediately, "You can't climb a thousand step ladder in two steps."

Are you taking in here just how smart Fabio really is? He's goofy and funny and an endearing character on-screen, but it's his business sense, intelligence and drive to succeed that have taken him as far as he's gotten.

Did Top Chef help? "It got me there faster. It took something I was already on the path to and sped it up." I can see that after having the chance to speak with him face-to-face. He's tenacious and methodical about his career and it's taking him to great places.

I asked him how difficult it is to run restaurants so geographically distant from one another, pointing out that my perfectionist self would get in the way and want to be making sure every dish was done right before heading out the door. He said he has a good system in place for each restaurant and he knows how to delegate (something that even with 7 children I've not mastered yet). "This is the recipe for meatballs, make the meatballs! That's it." He also pointed out that it's a simple 5-hour flight and he can check in whenever he needs to.

When asking about the new cookbook, I wondered how many recipes were mom and nonna's and how many were his. "Out of 150 plus recipes, I think 10 are mine!" Something I can tell he actually prides himself on. I pointed out a recipe for special gnocchi in the book I had a sneak-peek at and when I said, "They're baked! That's so much better for you." He told me, "We don't fry in my house there's never enough oil there to fry anything in. What's to fry?"

Which led me to the question I'd been waiting to ask. Fabio has worked with children and their families in an effort to get them to eat healthier for quite some time now and I wanted to know what his #1 tip to get children to eat healthier was and he said, "Lie to them." When I laughed out loud he said, "No, really. Sneak it in, hide it, lie. They never know what hit them." I wondered about how they would eat well later on if they didn't know what they were eating all along. How would they continue to make good choices? "Well, once they're old enough to understand, you let them in on it."

We talked about how the way parents eat affects the way their children eat and how children are more likely to eat something they helped make (which gave me a moment to show him my kids making pizza with me). He told me of a class with hundreds of children and parents in attendance and how, when he held up a soft drink can and asked, "Who knows what this is?" They ALL had hands up. But when he held up a head of celery and asked the same, he had only a few hands raised. "We're too disconnected from real food." I agreed and then we both said at the same time, "And kids have too many choices."

He told me, "When I was growing up, I never heard, 'What do you want to eat? What do you want for dinner?' Dinner was whatever was put in front of us!" I feel exactly the same way and many nights you'll hear me telling my own kids, "This is what's for dinner, eat it or you'll be hungry!" I think we can all use the lesson taught here: Get back to basics with food, limit processed foods and don't confuse kids with too many food choices.

I wish I'd had several more hours to talk to Fabio and ask questions, but I was off to work and he was off to an event that night, so we parted ways, he thanking me for coming to speak with him and me thanking him for the opportunity  He really is one of the most personable celebrities I've had the pleasure to meet and I hope you'll take the time to get to know him yourself by following him along online on one or all of his venues.
You can find Fabio at: