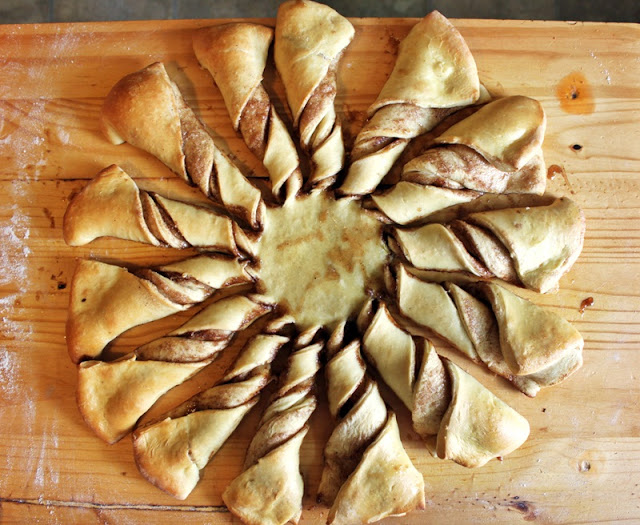 A long, long time ago (somewhere around 1990) I started getting recipe cards in the mail. You know, the free box to hold them in with 10 or so cards coming at a time. The set was called "My Great Recipes" and though I paid on time all the time, one day they just stopped coming. This was well before the internet and I never did find a phone number in any of the paperwork that came, so I resigned myself to having the cards I did have and let it be.

I did love those cards. In fact, I still have them. One recipe that caught my eye was "Maple Sunburst Coffee Cake". I believe I made it once and, not being a huge maple fan, I didn't make it again. My kids are big cinnamon roll fans, though so I took my standard cinnamon roll recipe and rolled it out differently.

Two circles of dough with butter and cinnamon/sugar in the center, cut into "rays" which are then twisted and there you have it. A pretty and tasty new way to serve up the usual cinnamon roll!

If you want it to be really sun-shiny, add some grated orange zest to the dough and top with an orange and powdered sugar glaze. Either way is just as yummy.

I won't give you a recipe for cinnamon rolls - there are so many out there already, but I will show you how to roll it and what to do with the filling. 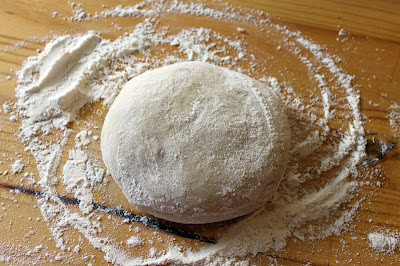 Half of the cinnamon roll dough. You need two balls of dough. 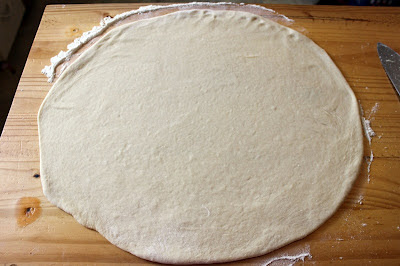 Dough rolled to 12-inches in diameter. (Mine was 18-inches because I'd made a huge batch of dough.) Roll two. 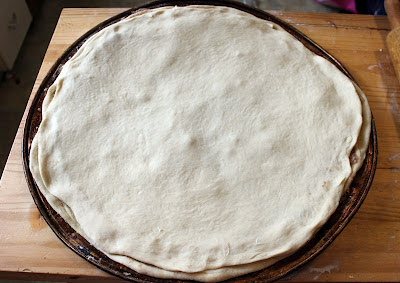 The two dough circles with cinnamon/sugar/butter in between. This is a special pan I usually use for pizza. I'd tell you what it really is, but then I'd have to ... well, you know. Use parchment paper to make it easier to move the bread once it's baked. 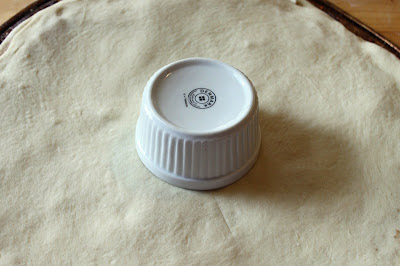 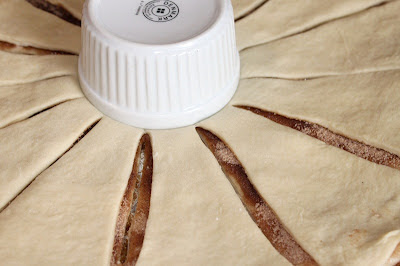 The cuts shown from the center. When making a 12-inch diameter "sun" should be 1-inch apart on the outside edge. The center will be far closer together than shown. Use a very sharp knife to make the cuts or the dough will stick when you try to lift it to twist. 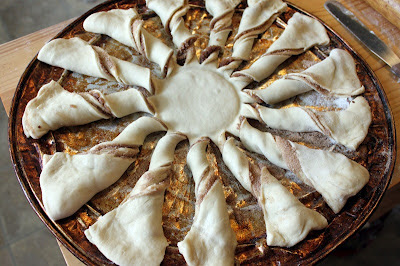 Twisted. Take each "ray" and twist three times. Once all "rays" are twisted, let rise again until doubled in bulk. Brush an egg wash onto the bread to make it look nicer when finished baking. 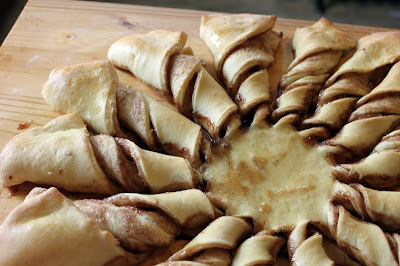 Bake according to recipe directions, checking after 20 minutes, and remove once the bread is golden brown. Wait for 10 minutes before moving the bread to another surface for serving. You can also keep it on the pan it baked on. In my house it rarely makes it off the baking pan. 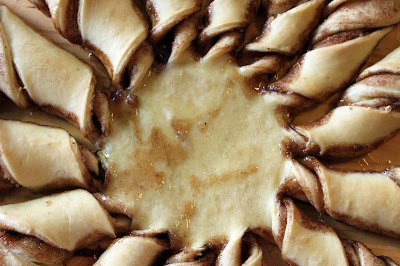 The center of the sun.