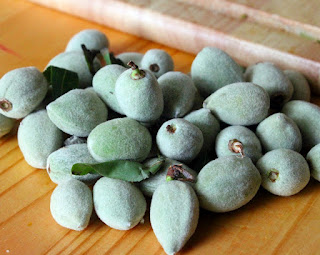 The first time I believe I saw green almonds was on an episode of Chopped, "One in a Hundred". I honestly don't recall what the chefs made with them, but when I saw them at a local store, I scooped up handfuls of the soft green fuzzy fruit and ran home to investigate and see what I could make with them.

Mostly it seems that green almonds, also called spring almonds and immature almonds, are eaten straight-up and lightly salted as a snack, mostly in the Middle East. There are other preparations from salads to stews and sometimes they more mature of the immature (if that makes sense) are sprinkled over ice cream and the like. Let me explain. 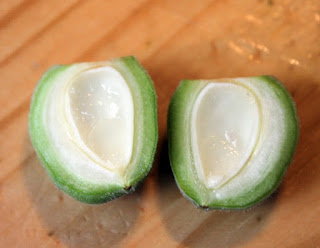 The center of very young almonds.

Very young almonds are edible as a whole. While mildly crunchy, they are pliable and very green in flavor with a slightly bitter finish. The very center, which would become the actual nut once fully mature, is a gelatinous mass. If the nuts are left to mature for even a few weeks' time the center becomes more nut-like though still softer and smaller than the usual nut we're all used to finding readily available in any corner market across the globe. 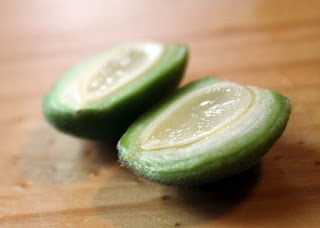 The ones I bought were the very young variety, being fully fuzzy on the outside (a few still had leaves attached) and gel-like in the center. The first one I tried was as-is. I washed it well and took a bite. Green. I salted the other half lightly and noticed a slightly bitter finish to the fruit. I was still very unsure of what to make of, or with, them.

As part of a lovely Facebook group belonging to David Leite's, owner of Leite's Culinaria, I noted that one of the readers was making a stew she had found on a friend's blog ... the recipe is here. Stew sounded great, but I was still unsure of what to do with the almonds I had. The most common stew is heavy in spices and I couldn't reconcile the soft spring-green color of these almonds with so much spice. I had also read in several different places that heating them caused them to be more bitter. I can say I didn't encounter this in any way.

I decided on fennel, spring onions and pork for my stew. Fennel in its fresh state is deep in flavor, but stewed or braised, it becomes subdued and very delicious. With the green almonds being slightly lemony, I thought the pairing would go well, and I was right. I added to that new potatoes and flat-leaf parsley, which carries over the lemon theme, and a bit of cream to pull it all together. The end result was a very smooth and flavorful stew - the almonds still had a bit of crunch to them, which contrasted well with the sweet pork, tender potatoes and fennel.

I'm still undecided about these fuzzy little fruits, but as they're only available 8 weeks a year, I may buy them again and if I do, I'll share the recipes and results here. 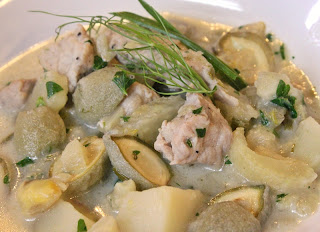 1. Wash green almonds well and dry. Set aside until ready to use.
2. Heat oil in a large heavy bottomed pot and add fennel and onions. Saute briefly - do not brown.
3. Add pork and cook until no longer pink on the outside.
4. Cut the stem end from each almond and then cut almonds in half following the natural seam in each.
4. Pour stock into stew and add almonds. Simmer for 30 minutes.
5. Add potatoes and cook for another 20 minutes or until potatoes are tender.
6. Remove stew from heat and stir in parsley, salt and pepper and half and half. Serve hot.

I have never seen or heard of green almonds, really interesting.

What beautiful little things! So cool to see, and that stew sounds pretty delicious. I just found your blog and am loving it.