A.K.A. The Chef and The Movie Star ... explanation to come. 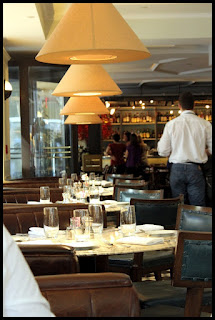 This week I was invited to attend a cookbook launch for Clare Crespo in partnership with Country Crock and my overnight stay led me to The Benjamin hotel in New York City. When I received word of where I'd be staying for the night, I immediately looked it up and the first thing I noticed was the photo of Geoffrey Zakarian.

Now, I'm not much of the starstruck type, but I appreciate public profiles as much as the next person and especially chefs, having my own culinary school time under my belt and the work I do being in the same vein. That being said, when I saw that photo and the realization that Mr. Zakarian's restaurant The National was housed in the same building hit, I had a moment. Well, it was a moment of wide-eyed WOW followed by telling my oldest daughter where I'd be staying and eating this time in NYC.

You see, Geoffrey Zakarian has been one of my favorite chef-personalities for some time and when The Next Iron Chef was aired this year, not only did we not miss an episode, Chef Zakarian was our favorite from the moment the commercials began running. Imagine our great excitement when he was crowned The Next Iron Chef.

But, I digress. On to the story.

The first evening the other bloggers, Toni, Caroline and Laura, and I arrived in NYC we made plans to have dinner at The National. Knowing I'd be there, I Tweeted Chef Zakarian and asked what he recommended we have. He suggested the risotto, the Ugly Burger or one of the specials for the night. So, I shared my knowledge with the other girls and we all ordered the burger and fries. I shared with them where the name for the burger came from and how impressed I was that Chef Zakarian took what seemed like a negative and turned it into a positive. (You can read about that here.)

We chatted while we waited for our burgers and I relayed a quick story about something that happened when I stepped out of the Port Authority that afternoon. As soon as I exited the doors and headed to the taxi line, a man stopped in front of me and said, "Hey! I know who you are! You're that movie star that's on TV." I glanced and him and said, "Not quite." and kept moving. The Benjamin is just over a mile from the PABT and it was a beautiful day for a walk.

The girls all laughed and said I should have given him my autograph. I wondered aloud what I would have signed and the consensus was, "Movie Star!" We continued talking about kids and blogging and bared our souls and told our most appalling secrets*. Ok, well, I probably was the only one telling appalling secrets, but I was in the middle of telling them something when, lo and behold, Chef Zakarian walked by our table. I stopped in mid-sentence, my jaw dropped and I barely whispered ... "That's Geoffrey Zakarian..." They all turned to look at him then back at me and I had the distinct feeling that I was either bright red or had suddenly sprouted an extra head because they started giggling. I thought I'd regained composure and then said something about it being hot in there and "wow I didn't expect him to actually BE here." They continued laughing and asking if I thought I might pass out, but the Chef walked away and I shook myself back into existence and tried to recall what I'd been saying.

The running joke then was that the Movie Star had been Chef-Struck. And I do mean running joke - I heard it the next day repeatedly and was even tattled about on Twitter.

Beyond all that silliness I must say: Our servers were attentive, professional and had our orders correct. The Ugly Burger is divinity - a seriously juicy burger topped with pickled red onion, pickled jalapenos, pickled Kirby cucumbers, Gruyere cheese,  tomato, Bibb lettuce and  NTL burger sauce all sandwiched between halves of what I'm reading is an onion roll, but seemed more like brioche to me. And the smoked paprika fries? Perfection. The atmosphere was busy, but not too loud, in fact, we were laughing rather loudly at times, but we were able to hear one another well without leaning in and asking for repeats. For a Tuesday evening, the joint was jumping, in other words. The decor and music were contemporary and soothing and the lighting was just right.

The next morning we all gathered with Country Crock and Unilever teams to discuss the launch we were attending that day and breakfast was just as good (though a couple of us really wished we could just have another burger - it was that delicious). I had the Roasted Pepper Omelet with Roasted Potatoes and we passed around Cheddar Grits (I wanted to keep those to myself). Everything was, once again, perfection. 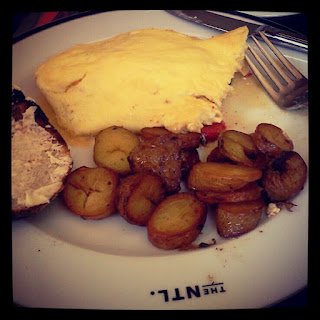 Breakfast at The National

I wasn't disappointed in anything at The National except myself - for not breathing and saying "hello" to Chef Zakarian. That's OK, there will certainly be a next time - I can't see going the rest of my life without another Ugly Burger - and if the Chef walks by then, ... I'll stop him and sign an autograph.


*Line from Little Women in case you were wondering.

Hi there! Found you on LVBF facebook page... I just want to say Zacarian is my favorite chef and my favorite eye candy... I totally would have been the same way, "Chef Struck" as your friends call it! Sounds like an amazing experience!!!

Thanks for stopping by! You know, I realized after I wrote that it sounded as if I were in love with the man ... just his work! I admire him so and honestly didn't expect him to be there, so when he walked by I just had a total brain freeze!