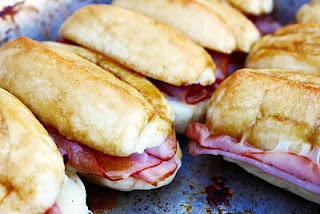 There's nothing like a versatile recipe to make my day. Add to that affordable and quick and you have a real winner for me. With so many picky eaters in this household, it's difficult to make something that everyone will like. This sandwich can be made with any meat or cheese and come out just as good so experiment a little like we do. Switch out the ham for turkey or the provolone for Swiss or cheddar. There really is no end to the combinations with this recipe.

The original recipe (this is actually quite old) most often calls for a sweeter roll like Hawaiian, but the miniature Portuguese rolls I used were perfect as well. I still think the glaze could be a little sweeter, but everyone else here was fine with them as-is. 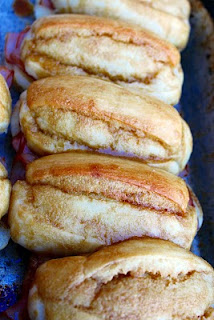 1. Melt butter and stir in honey mustard and Worcestershire sauce.
2. Brush the bottom of a 9x13 baking pan with glaze.
3. Split rolls in half horizontally and layer the bottom of the pan with the bottom halves of rolls.
4. Brush the cut sides of the rolls with glaze and layer ham and cheese on each roll.
5. Place top halves of rolls on the sandwiches and brush with remaining glaze.
6. Bake in a 350 degree oven for 25 minutes or until golden brown.

I may have to try these. My sis has made some similar sandwiches, but the glaze was poured over and it ended making the sandwiches a little soggy. (Yuck)

This looks so delicious.

It looks like some sandwiches i've eaten in Spain! So delicious!
Andrea from Italy

I like your Blog and your posts are very informative. Very inspiring. I’ve recently set up a Blog about cooking and was looking around for inspiration and came across this page and I have to say I’m impressed with your dedication and hope that mine can reach this level someday. Congratulations
If you would like to check out my Blog and give me some pointers I would be very appreciative.
http://howtocookanegg.blogspot.com/
Thanks

I have been craving ham sandwiches all week. How could you have known? :)

Stumbled! I wish I was eating one these right now. I'm so hungry!

these look very good. I think I will try it.

They look delicious...going to give these a try out:) Thank you