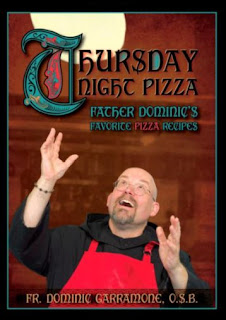 In our house Father Dominic has become known as "The pizza making monk", my fault of course, but everyone now knows exactly who I'm talking about when I bring him up. There is so much more to Father Dominic than pizza, and that is evidenced by his first six books and public television show Breaking Bread with Father Dominic which ran for several years beginning in 1999. He's not only the chief pizza maker at the monastery and baker extraordinaire, he teaches religion and directs the plays at the academy and has also authored two plays. Very busy, very talented, very blessed. 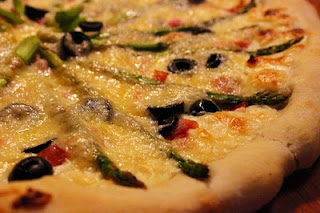 His most recent book, however, is all about America's favorite food; pizza. The first question that came to mind when I saw the title of the book was, "Why Thursday night?" In our house, like so many others across the country, Friday night is the usual pizza night. The explanation is a rather easy one. Friday is a day of fasting and abstinence from meat when the monks at Saint Bede consume only one meal. While pizza can fit the meatless menu, it isn't very fun without the plethora of toppings available, so on Thursday night, or haustus night, they indulge a bit more knowing that the fast is coming the next day. It's also a community night when the monks get together to fellowship through conversations or games, whatever strikes their fancy that evening.
I read through this book rather quickly, it's a very easy read and I found myself drawn to the stories of Father Dominic's monastic life. The recipes are straightforward, but don't expect to see the usual pizza recipes here. Father Dominic feels very much the way I do about pizza, after the crust anything goes! He provides not just recipes for dough, but full explanations of the differences between them and exactly how they are to be prepared without being boring or tedious. Likewise, there is a chapter all about sauces before moving on to the pizzas themselves. In the monastery there is large garden tended by one of his fellow monks, Father Ron. The garden provides pizza topping inspiration and the pizza sauce is made from the heirloom tomatoes grown within. Now I'm looking forward to my own garden this year and can't wait to harvest and bake. 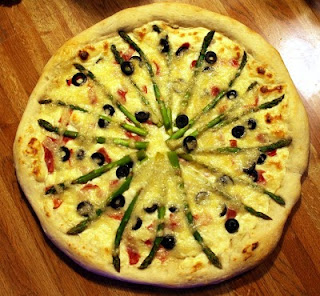 I took the opportunity to speak with Father Dominic about his newest book and would love to some day have to chance to meet and cook with him. I believe his closing sentiments to our conversation were the same. He was very fun to talk with and I really wish we both had more time to spend on the phone, I have a feeling we'd have talked for an hour or more easily. We talked a bit about his family and growing up baking, about drama and the fact that I have children who have been in theater and plays for quite some time. We even have similar loves for antique recipes and books.

Of the twenty pizza recipes offered (two are desserts!) I asked which was his very favorite. He did one better and gave me not just his favorite from the book, but his favorite all-time. His favorite from the book is the Four Cheese Tomato pizza and his favorite all-time is one from a pizza parlor in St. Louis named Thats'a Nice'a Pizza where they serve up a pizza called The Powerhouse which consists of a thin crust topped with sausage, pepperoni, extra cheese, hamburger, onion, jalapeno and chopped tomato. Wow! Father Dominic makes this pizza at the monastery as well with a few slight additions and variations. Either way, it's one I want to try for myself.

I have plans to make each and every pizza in this book, but for this post I made the Asparagus Mornay (see photos) and fell in love immediately. The flavors were so perfectly paired it was hard not to think that a gourmet chef had come up with the combination. I had three slices and don't feel guilty at all. If the rest of the pizzas in this book are as good as that one, we're in for some very delicious pizza nights at our house.

You have a beautiful blog and I love reading!

I would like to present you with the “One Lovely Blog “Award. Please drop by my site to pick it up when ever you are free.

I loved watching Fr. Dominic's show on PBS. I've been meaning to track down a few of his cookbooks. Thanks for the reminder.