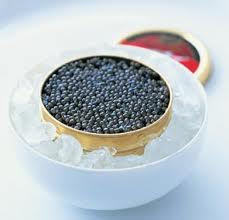 I find that everyone knows what caviar is, but so few people have tried caviar, and even fewer people actually consume it on a semi-regular basis. I’ve pondered this phenomenon for some time and have found that people are immediately put off by caviar for two main reasons:
1) it’s too expensive, and
2) so few people are even exposed to caviar, therefore, they don’t try it due to Fear of The Unknown.
It is my hope that I can dispel these two myths while also giving you info on caviar no one will tell you, mainly, that it’s delicious, affordable and versatile. What follows is a list of my Top 5 Reasons to Love Caviar!
1. Caviar is a versatile ingredient in food preparation
Traditionally, caviar has been served with hors d’ oeuvres or as a garnish in continental cuisine. From early on the caviar market has been dominated by Russian or Iranian black caviar from the black sea basin. Did you know, however, that caviar is also widely produced and eaten in countries ranging from Greece and Italy to Sweden and Japan? In Greece, for instance, caviar is made from carp roe and made into a paste that is typically eaten with bread, called Tarama. In Japan salmon roe is used in many types of sushi preparation. And, in Italy, caviar is even used in a dish called Bottarga. 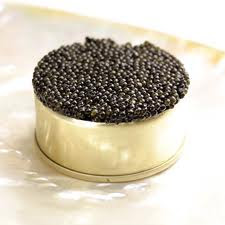 2. There are many types of caviar for many tastes

Some people, I’ve found, try one type of caviar one time and decide they hate all caviar. This need not be so because there are many types of caviar made from many types of roe from many different fish. The various types of black caviar, Beluga, Sterlet, Ossetra and Sevruga, come from the black sea basin from the various sturgeon species that live there. There are, however, many types of fish roe used for caviar production, such as salmon roe, lumpsucker roe, cod roe, whitefish roe, carpe roe and other roe from sturgeon species not of the black sea basin.

3. Caviar is more affordable and available than you think

Traditionally, black caviar and its high market value, which is mostly due to the early Iranian and Russian control of the market, has fueled the mythos of caviar’s hefty price tag. True, Russian and Iranian black caviar, and even some Italian fish roe, can be very expensive, however, there are many other caviars from many other places that are more affordable. And, don’t think that just because it’s cheaper it must be inferior, because caviar from various other fish and other countries can be just as good (if not better) as black caviar from the black sea basin. Golden caviar from the N. American great lakes region, for instance, is widely consumed while also enjoying a relatively low market price. 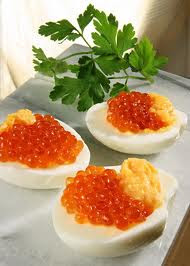 Due the fact that most caviar enjoys little processing it retains most of its vitamins and minerals while also remaining low in calories. Many say, as well, that caviar is also healthy for your heart and skin because it’s full of omega-3 fatty acids. Though caviar can be healthy it is unhealthy to consume too much of it, as well as other fish, due to the trace amounts of mercury present in virtually all commercial fish products.

It’s healthy. It’s affordable. It’s versatile. It’s delicious. What else is there to say? Caviar is the perfect non-fried appetizer so you won’t feel heavy and weighed-down after eating it. Caviar is also affordable so no matter what your budget you should be able to find fine caviar for your event. And, caviar is so versatile that you’ll be able to find the perfect kind for your hors d’oeuvres, whether it be Mediterranean, Russian or even Japanese-themed cuisine. There are also many new ideas for using caviar in various fusion dishes these days; it only takes a little research. For more info on caviar and it’s amazing character check out CaviarGalore.com!


Post text and images property of by Anthony Portz of CaviarGalore.com

Email ThisBlogThis!Share to TwitterShare to FacebookShare to Pinterest
Labels: caviar

I'm definitely not one to avert from caviar so I say bring it on!