Children are picky. Let's face it, clothing, hair, FOOD - it's all something kids can be very particular about. In this house the food issue can be huge and there are several reasons for it, but in a nutshell the kids are very discerning about what seasonings I use.

One of their favorites is a well-known national seasoning blend that they like on bagels, no matter what they're topped with. It so happens that we were out of that particular one when Lawhorn's Signature Seasonings All-In-One Professional Seasoning Blend showed up at the door. 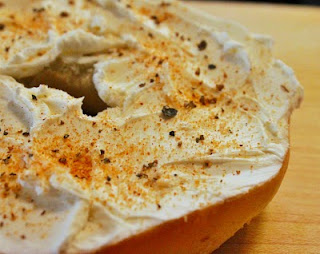 Everyone's favorite use, up-close and personal.
My oldest son grabbed it from the shelf and used it, then the next child used it and the next and the next (and you do know I have 7 kids, right?) until everyone had tried it without my knowing. They were hooked and I've had to fight them off so I can effectively test it for myself and deliver results to my readers.

Lawhorn's was developed by Tim Lawhorn, then Executive Chef and Assistant Food & Beverage Director of the Innverary Hilton Hotel in Ft. Lauderdale. Trying to help cut costs for the hotel, he began toying around with herbs and seasonings to come up with a blend that could be used on virtually anything and he hit the jackpot. The blend that he cam up with was so unique that it tasted different on everything it was used on.

Skeptical as I am, I tried it for myself on everything I could think of. Pork, chicken, beef, shrimp, fish, veggies (zucchini with Lawhorn's is to-die-for). Yep, Tim Lawhorn is right, it really does have a different effect on each food. My personal favorite is Lawhorn's on pork, but the hands-down winner here (beyond the kids' cheese bagels) is mixed into ground chuck for just about the best burgers you'll ever eat.

Worried about sodium? Don't! Lawhorn's contains 65-7-% less sodium than most 'seasoned salts', is made from 100% natural ingredients and is certified Kosher, as well.
Give it a try, you absolutely must, because my telling you won't sell it, it really sells itself. Pick up a bottle at the stores listed here, or buy it directly from the website.

While you're there, check out the blog, recipes, testimonials, history of Lawhorn's and even the
Posted by Anne Coleman at 9:56 AM