Have you ever seen Stanley Tucci and Tony Shalhoub in Big Night? If not, and you are anywhere near a serious foodie, or even just a fan of either actor, you must watch it. The story is that of 3 brothers who own a flailing restaurant and are in need of financial assistance. Their search for funding leads them to believe they will be serving a famous musician at their restaurant and they plan a 'big night' with an even bigger meal for the musician and the friends they've invited.

The pièce de résistance of the huge meal is Timpano. Watch here:


I scoured the web and found Stanley Tucci's mama's recipe for Timpano and tackled it over three day's time. It was just as good as the guests in the clip make it out to be. I had children making noises that rivaled the dinner scene from What About Bob? It really is that good.

I won't share the recipe here, but it can be found in Cucina & Famiglia: Two Italian Families Share Their Stories, Recipes, And Traditions by Joan T. Tucci, Gianni Scappin and Mimi S. Taf

Here, however, is the building of a Timpano: 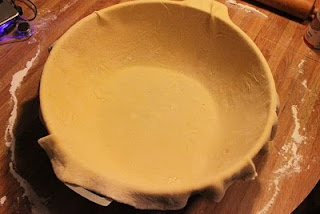 You need a very large pan. The usual is a 14-inch enamel coated basin, but I have a 6.9 quart caldero on hand from IMUSA which I used. The end result doesn't look the same on the outside, but I promise it tastes just as good. 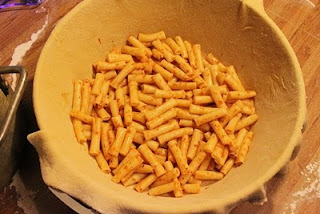 Adding pasta tossed with Ragu Tucci to the first layer. 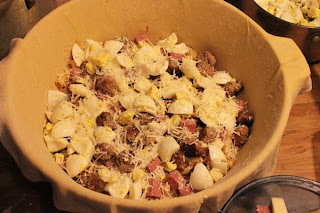 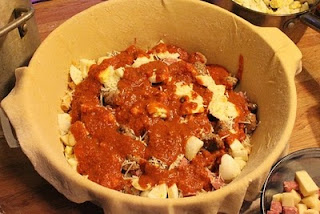 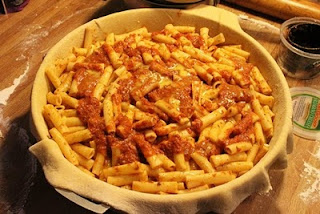 Top the second layer with a last layer of just pasta and Ragu before closing up and baking. 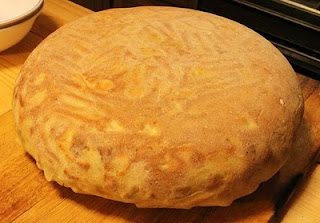 The baked Timpano. Mine looks more disc-like than drum-like, so if you can get the right pan, do so. 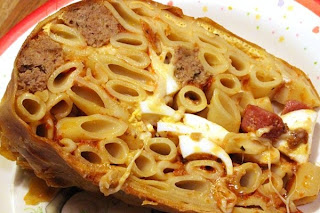 One HUGE slice of Timpano. This serves up to 16 very easily. Be prepared for leftovers if you don't have a crowd to feed.