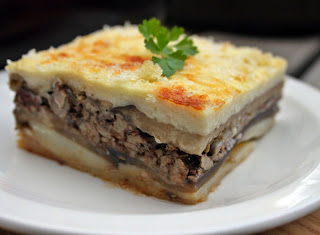 Moussaka is one of those dishes that I always felt was rather common, but once I made mention of it to friends and family I realized it may not be as common as I thought. I was met with reactions like, "Moose what?" and "Moose caca?" (you can't have 7 kids and not hear that one at least once), but most often it was simply, "What's that?"

What's that, indeed. I myself wasn't 100% sure, having never eaten it and only having read about it or heard of it the same way most Americans have, by watching "My Big Fat Greek Wedding". I knew it was eggplant and bechamel, but hadn't the foggiest notion how it was put together or what it tasted like.

At one time during my adolesence I was surrounded by Greek-Americans that were all friends of my mother's. She owned a small re-sale boutique and right next door to her shop was Nick's. Oh yes, funny as it sounds because of the commonplace moniker, there really was a Greek restaurant named such right there. My mother and the proprietors, the Bozakis family, became fast friends and mom, who also loved to cook, was taught much about Greek cuisine from the real deal, but never moussaka.

I'd thought about making it from time to time, but it seemed out of reach and difficult and far too time-consuming for a person as busy as myself. Triple layers meant triple preparations and the question as to authenticity always plagued me. I don't like making dishes from other cultures that aren't true to tradition and I wanted to be certain.

I set out to research as in-depth as possible, first with the cookbooks I own and secondly on the internet. What I found only confused me further. Greece isn't the only country responsible for moussaka, in fact, the true origins are Arabic in nature and many countries across the Middle East seem to have a version all their own. What I was looking for, though, was the Greek version.

After I found several recipes I liked among a veritable plethora of them, I was still not satisfied that I'd never had it so I scoured the phone book and started making calls to local Greek restaurants. Each call left me wondering if I would ever find it locally. Finally I hit on Yianni's Taverna, and I struck gold. They whipped up some and it was picked up via take-out. 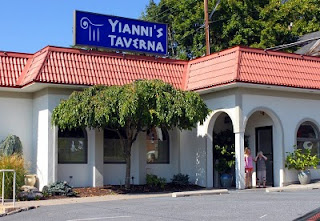 My first taste of real moussaka was a lightbulb moment ... an "Ohhh, so that's what it is!" Pure bliss. The way it was made was exactly as I'd decided I would make mine, a layer of potato on the bottom, topped with rich meat sauce and covered in thick and creamy bechamel. I nearly wanted to photograph it and pass it off, but it was so good there was no stopping myself. My 6 year-old son ate with me and he loved it every bit as much as I did. This part means if you're in the Lehigh Valley, you need to stop by Yianni's Taverna for beautiful atmosphere and fabulous, authentic Greek food.

Having finally had moussaka and and understanding then for what I was really making, I set off to duplicate it. The recipes, though, were a challenge. There were differences of opinion on which cheese to use, whether or not to include potato, how to layer the ingredients and so on. I compared and read and compared some more and then finally decided on how best to prepare it.

My first batch used ground lamb and canned tomatoes. I don't cook with lamb and haven't since culinary school so the odor was something to get used to, but the flavor was divine. I paired it with spices and wine and fresh herbs and cooked it until the tomatoes were tender and falling apart. I salted and drained the eggplant slices and whipped up a bechamel worthy of its origins. Layered together and baked for an hour, the result was absolute perfection; I know because my 6 year-old told me so. He said it was just as good as the one we'd brought home.

Not convinced that I knew exactly what I was doing, I made it again; this time with ground beef and tomatoes from the garden and a blend of Kefalotyri and Kasseri cheeses. I repeated the potato on the bottom because I enjoyed it so much. The thin layer of potatoes soaked up the rich juices from the meat sauce and were so tender and delicious they would almost be enough by themselves. The second batch, with nutmeg laced bechamel and lighter flavored ground beef was every bit as wonderful as the others had been.

Now that I've eaten it thrice and cooked it twice I can say with complete certainty that I will be making it again and again. Even if it's time-intensive, it really is so worth it. Here is the recipe I settled on: 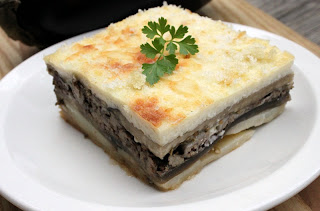 Project Food Blog Challenge #1 : Get the Vote Out!

Yesterday was my post for the first Project Food Blog challenge and today, we vote! The popular vote helps contestants move forward in the event they are not pushed ahead by the judges, so every vote counts!

Visit my profile at Foodbuzz'z Project Food Blog and click to vote!

Posted by Anne Coleman at 9:00 AM No comments:

In the 5 years I’ve been officially blogging about food, I’ve been asked time and again why I blog and exactly what I blog about. I’ve answered a time or two, but I don’t believe I’ve ever really gotten into that here.

The ‘why’ is very much the same as many food bloggers; I love food and, even more so, I love to share food. Cooking is cathartic to me and when I need a pick-me-up, the pantry is the first place I turn. I also love to create, but it’s sharing those creations and having others enjoy them that brings me true happiness.

Beyond that, and the original reason I began food blogging, was the desire to have my own family food history written down for my kids. I loved our family recipes, the ones handed down from generation to generation, and always wanted to know where each recipe originated or when it was eaten and why it was made so often, but was left instead with a stack of yellowed index cards held together with a rubber band and no history at all attached to the food my ancestors shared. It was a void I didn’t want my own children to have, so I started writing it all down - in a pen & paper journal first, then on the internet.

Once I started meeting other bloggers, I was totally hooked, and adding regular readers to the mix only made it that much more fun and challenging.

So, as an official contestant of the Foodbuzz Project Food Blog I will answer the first challenge, which is to share how my blog is unique and why I should win the grand prize of $10,000 and the coveted title of the next ‘Food Blog Star’ in 7 short points: 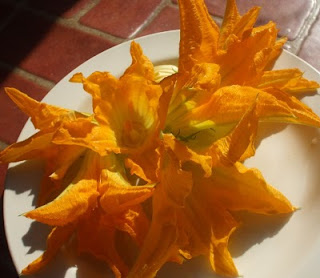 1. I’m informative: I am a person plagued with a ‘must-know-why’ attitude that pervades nearly every aspect of my life, and food is no exception. From where things are grown to who was the first to decide to eat them to how to best cook and serve them, I aim to know it all and I try to impart that to my readers.

Posts about growing black beans, cooking fiddleheads, which zucchini blossoms are which and step-by-steps to making stocks and sauces or crafting homemade pasta riddle this blog and always will with one exception over some others - I don’t know it all and I love to learn more!

2. Personal family stories: One of my favorite foodie things is reading stories about food and recipes and the history behind them, so I tend to share my own food connections with others. After all, that’s what blogs were intended to be, yes? A personal web log of whatever one had a mind to log. I try and keep it real here, and the family stories are not only fun for others to read, but also wonderful for me to re-live while writing. Grandma’s Confetti Cookies, Great Grandma’s Rabbit and Mom’s Fried Chicken are just a few of the tales I’ve had the pleasure to re-tell.

3. Original recipes or twists on classics: I try very hard not to re-post recipes from elsewhere. I have done it, and always give credit where credit is due, but I like to offer up something that you can’t find just anywhere, so I develop my own recipes or spin classics on their heads to keep things fresh and different. Banana Pear Bread, St. Andrè Dessert Tart and Simon and Garfunkel Roast Chicken are 3 of my favorite originals. 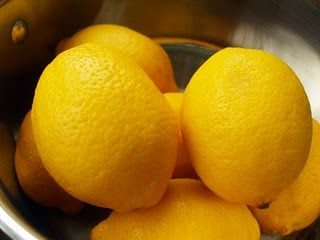 4. I am tenacious: When life gives me lemons, I don’t just make lemonade, I make 5-layer lemon chiffon cake topped with chocolate ganache and crumb-coated with hazelnuts - and why not?

In 2007, just after my second year of blogging and 6 months into blogging for Disney at Family.com, absolute disaster struck our family when my husband fell 3 stories from the roof of the building he was working on. It was a very dark and difficult time for us that continues to this day and my blogging outlet, though it was about food, proved to be an invaluable source of solace and the perfect outlet for all the many feelings I was going through. I kept blogging here making the most of things and came out stronger as a result.

5. Attention to detail: I am a bit of a perfectionist, so if there is a misspelling or grammatical error, an incorrect ingredient amount, or a link that’s not working, I try my best to fix it and make things as accessible and easy to read as possible. While I love to write and love to talk, I know the best way to keep a reader is to keep it short and sweet, so my posts often reflect that with a simple header, photo and recipe.


6. Humor: Life is funny, and even when it isn’t I can somehow draw the humor out of any given situation. I try to fit that into my blog as often as possible without being offensive, and I’m pretty sure most times I hit the mark fairly well. If not, oh well, at least I got a laugh out of it.

7. The last thing I have in my corner is also the best thing: I do all of this blogging here, on A Thousand Soups and recipe development at Family.com, with 7 children still at home. They were the impetus for this whole blogging career I’ve begun and they continue to be the thing that motivates me. Whether it’s because I spend a lot of time simply cooking for and feeding them or because they are my finest critics and biggest fans, they will forever be the reason I do what I do and the driving force behind my always wanting to be better.

So, there you have it, Cooking with Anne in 7 Easy Steps. I look forward to the remainder of this competition and wish all my fellow contestants the very best!