Boy, oh boy - the photo of my homegrown black beans in my last post has caused quite the stir so I thought I would share the very little I know about growing black beans with you.
Dried beans seem to be one of those things that nobody really thinks about growing. You head to the store or the co-op and buy them bagged or in bulk, take them home, clean through them, soak, and cook. It's pretty simple that way, really, but when I saw the packet of black beans for sale at my local gardening spot, I had to grab them.
GROW my own black beans? The hell you say. Really. I didn't know what to expect. The back of the package gave the usual spacing and depth instructions along with watering and light recommendations, but as any gardener knows, the packet tells so little.
I set them to seed in trays with the rest of my plants and then set them in the ground when it was time. The first surprise I had was the plant itself. It looks exactly like a blue lake bush bean and I had to be very careful about labeling so I would know which were which. Bush beans are one of the first successful vegetables I had ever grown and I look forward to them each year. No matter what else I'm growing, I must have green beans in the garden. The difference is, and I found this out quickly, black beans are like pole beans because they climb. I jabbed stakes into the ground and let them wind their way up.
I watered as I did my green beans, not too much, not too little. I set them in a sunny, but not too sunny, spot (vague enough for you?) and watched them grow. 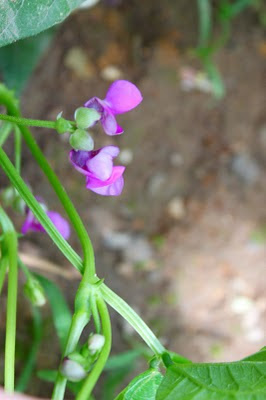 The second surprise was the flower. Again, they look exactly like bush beans, but PURPLE! The first sight of one of those flowers was a truly breathtaking moment. As soon as I caught my breath I said, "Of course! Black beans have purple flowers!" Because, in reality, black beans aren't really black, they are a very deep purple. This can be seen any time they are soaked.

Then came the pods, which - again - looked like bush beans. Ever so slowly, though, they changed color and nearly looked like they were rotting. I was concerned. What if they were too done? WHEN were they done? Did I need to dry them once they were picked? Of course, I knew where the answer was: Google.
Sure enough I found that black beans are not ever really "fresh" because they are left on the plant to fully dry and darken. I popped open a pod and to my horror the beans within were snow white except at the very edge, where they were beginning to turn purple. Aha! They TURN black as they dry! 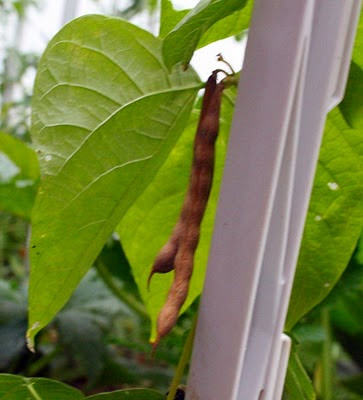 Those pods aren't rotten, they're purple! 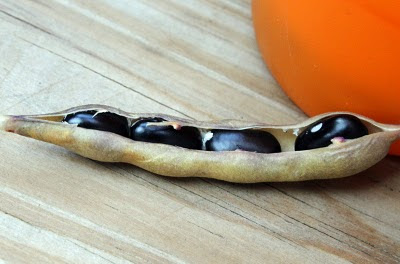 Black beans in the pod.
So, I mustered up all the patience I could and let them alone. Sure enough, before I knew it each pod was full of hard black beans. Wow. Just wow. Now I have bushes full of drying black bean pods and once I harvest them and cook up something splendid I'll be sure and post it!

Email ThisBlogThis!Share to TwitterShare to FacebookShare to Pinterest
Labels: black beans, gardening, grow your own

Thanks for all the info. I did some googling too after your other post & have already planned where I'm planting them next year.

Great post! Who knew you could grow your own black beans? I'm afraid we might not have enough summer heat in Seattle, but I might have to look into it. I'll look forward to hearing your report when you cook them.

wow this is really cool! i love to garden but never thought about growing beans!!!

This was a great read, I never thought to plant my own black beans but I will give it a try

I love black beans! The most inspiring post of my day.

Thank you so much for this info! I have black beans growing in my garden right now and I now know that I need to just leave them be until they are "done". We had a weird summer here in western Washington and I was worried that they might not grow.

I planted black beans myself and they've just started to flower. I saw the tiny green shoots and was getting excited, ready for them to grow so i can pick them! Needless to say, I'm grateful for this post because I had NO IDEA you had to let them darken on the plant.

How cool Anne- you have those pretty flowers and then some great black beans to eat!

An American in Powys said...

We grow a lot of beans in mid Wales, but something tells me black beans require more sunshine than is on offer here. . . has anyone tried it in a cool, damp climate?

How wonderful! I've been surprised to. I was disappointed by my parsley seeds not growing this summer and looked forlornly at the small planter empty of all life, when God said, plant some of those black beans you just bought. WHAAAAT! Could it be. So silly me I planted three. And lo and behold, one came up! Strong and tenaious. I loved it so. Just so my pot had life in it. I'm just going to move it to a bigger planter since I live in a condo and can't plant outside. It's on it's third leafing and you know they grow in threes. Thanks for the post. Now I kmow what to expect.

I hope they're fabulous! You'll have to come back and let me know!

Something ate my little bean stalk... chewed through the bottom like a beaver & then... TIMBER, over went the whole plant. My little guys are only about 2 weeks old (6 inches high) and I'm worried for the others. THEY'RE GROWING INSIDE in pots, so I'm baffled. What eats beans (besides me) ? Crickets? Spiders? Velociraptor? Anybody have a clue?

Thank you for the post. It was my first time growing black beans. Forgot which row was black beans and which was green beans. Picked them all and prepared them like green beans.....boy were the black beans tough and stringy!! lol still kinda tasty though. They've given me three harvests already and I'll be sure to leave the last harvest on much longer to dry. Thanks!