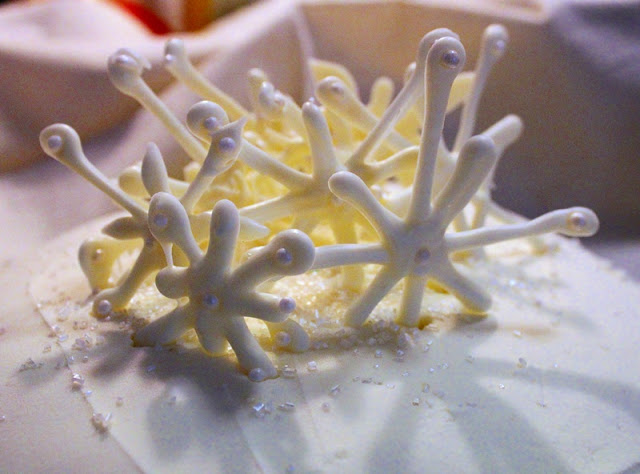 The top of this year's snowflake cake.

I think the first year I started blogging, which was 2005, I went into great detail about our Christmas celebrations and food. Not much changes from year to year in the department, but there are differences. Usually it's something one of the kids has requested or a recipe I caught from a magazine that I had to try. This year one of the desserts was something I haven't made for about 12 years - a snowflake cake.

I can't remember what magazine I found this beauty in, but I thought it was one of the prettiest cakes I've ever seen and had to tackle it. Back then I had 3 children and lots more time, so it wasn't so taxing to get it done. Over the years, as we added 4 more kids and lost some time I let it slide and intended to make it, but never got 'a round tuit'.

This year I wanted to make that cake come Hell or high water, and I did. I was amazed at how easily it went together and quietly scolded myself for not having done it earlier. It was a show stopper - as it was meant to be - and the cake itself was so good that my mother-in-law called (on behalf of my brother-in-law) to ask if we had any left. 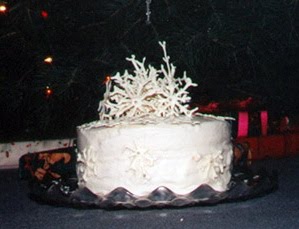 My first snowflake cake from 1997.

The cake itself is one of my newest favorites, Dorie Greenspan's Perfect Party Cake, which I first made with the Daring Bakers almost 2 years ago. I have since come to love that cake and use it as a base for many, many desserts. This time I made 4 layers of the cake and sandwiched ALDI's Fruits of the Forest Spread between the layers (this spread is to-die-for and you must find an ALDI and seek this out) and topped the cake with a basic buttercream icing.

Once assembled, I piped 'snowflakes' (which were really more star-like because they have more than 6 sides) out of melted white chips and added pearlized dragées to them. I usually use silver or gold dragées, but they were hard to find this year.

Once the snowflakes are set, I add them in a pile to the top of the cake and sprinkle the whole top with large crystal sugar to give it extra sparkle. Give it a try sometime - it's a good cake for all winter long, not just Christmas.

What are the food traditions your family can't live without? What is something new you've tried this year?

That's beautiful Anne!! I love Dorie's party cake, it's so delicious :) Hope you had a joyous holiday!

omg Anne that is so beautiful, the snowflakes especially

What a beautiful cake and I love the snowflakes!!

Wow,that is a beautiful cake! I love "building cakes" and will have to try this one!
I agree the Fruits of the Forest spread at Aldi is to die for. We also love the Black Currant one.