The Food in Manhattan

I was fortunate enough to spend the day with my cousin last Friday in New York City. Now, I should specify that she's my cousin by marriage, but after nearly 22 years of marriage the word 'in-law' doesn't come up too often anymore.

Chris being the astute woman that she is realized a long while ago that I needed a break from the madness of the past 2 years and invited me to come for the day and see the sights. I didn't realize it meant 'almost every sight in Manhattan', but I didn't mind the race one bit. I think she let me know about halfway through the day that most people referred to a day trip with Chris as bootcamp. They're not wrong. Here is a map of everywhere we went so you can get an idea of how far I was dragged (wink).

As much of a taskmaster as she is, I had a great time and saw more than I've ever seen at any other time. I hadn't been to The City for nearly 21 years, so I was way overdue! Here's our day in photos. I had my old camera with me for safety reasons so some of the pictures aren't as good as they could be. Click on links for more info on any of the places we went to.

The minute I got off the bus at PABT, Chris whisked me off to the subway and led me to the Chelsea Market, showing me The High Line on the way. We had coffee at Chelsea and then it was a sound-barrier-breaking taxi ride to the Rock & Roll Hall of Fame Annex for a great show and very cool museum. Any Lennon fans (like me) must get there for the Yoko-created John Lennon limited engagement exhibit. Beautiful. 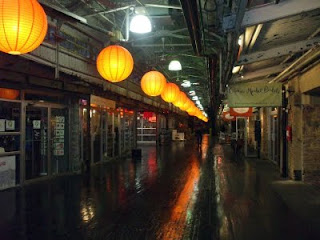 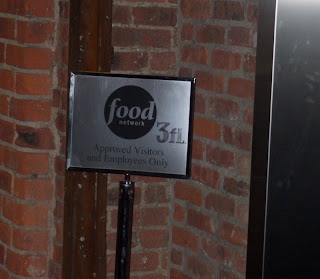 The Chelsea Market and the elevator that leads to the Food Network offices.

Next we were off to stores like UNIQLO, CB2 and Dean & Deluca to see the shopping side of Manhattan. After that it was another wild ride where we landed for lunch at Blue Ribbon Sushi. Now, I'm not a seasoned sushi eater, but I started my sushi-eating career at a very fine local establishment, biasing my taste buds for any sushi that wasn't top-notch. I then went downhill consuming store-made sushi that just isn't anywhere near the same as the very fresh kind.

After hitting up Blue Ribbon with Chris, I'm not sure I'll ever want to have sushi anywhere else. The nori was still fresh and pliable, the rice precisely vinegared and the fish? The fish was so fresh I've never had anything quite so tender. We had several rolls between us: Spicy Tuna & Tempura Flakes With Cucumber inside out and California rolls with Yellowtail and Salmon. Perfect in every way. Not only was the food fabulous, but the wait staff was beyond helpful, the decor simple but beautiful and the bathrooms immaculate. If you're getting to Manhattan anytime soon, you must stop in and order some of the best sushi around. 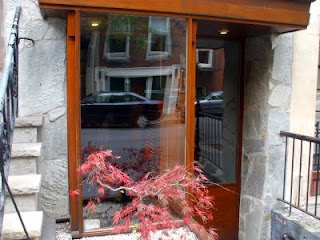 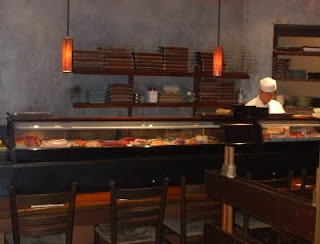 The front of Blue Ribbon - unmarked, it looks more like 'the secret society of sushi'

Shortly after our sushi we were off to FAO Schwarz. Every time I've been to NYC I've missed my chance to see FAO because of long lines. We totally lucked out and got in very quickly. I wished the kids had been there to see it all, but I made sure to take lots of photos for them and it was just as fun as I always thought it would be. 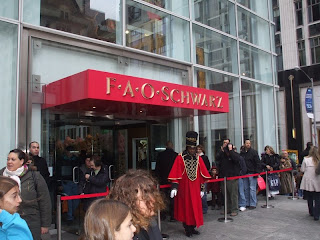 
We ran across the way to see The Plaza and gape at the impossibly rich folks having tea and being waited on hand and foot by men attired in tails and very shiny shoes. I thought it was rather droll and Chris and I got to giggling about the extravagance of it all. We trotted past the very famous Oak Room and back out into the chill to head to Dylan's Candy Bar. 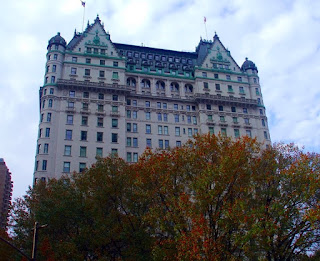 The Plaza - I'm pretty sure Eloise is waving from the window.

Dylan's Candy Bar is another place I took lots of photos. Chris picked up candy bars for all the kids (including dad!) and I stared far too much at the array of sweets and bright colors. This is one of those spots you don't want to miss, especially if the kids are with you. 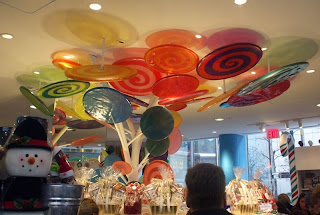 The center of Dylan's - a lollipop tree!

Grand Central Station was the next stop and I was thrilled that there was an O & Co. store there. I ran in, sang a little song of love and bought a bottle of oil that may just have taken a sizeable chunk out of one of the kids' college funds. There's nothing like good olive oil to make one's day. Really. Chris said something about other people liking wine like I like olive oil and she's not very far from the truth.

We stopped at Chris' apartment to rest our legs and then she took me to the coolest place I've ever been to: 230 FIFTH, an exclusive and chic rooftop restaurant with a view of The Empire State Building that just beats all. Check out the Virtual Tour of the rooftop. We checked out the rooftop, but it was too chilly and windy to stay there to dine. Despite the fact that there are blankets and warm robes provided to patrons for their comfort, we opted to sit in the plush dining room and enjoy the view from a warm spot. Chris ordered sliders and fries and they were two of the best 'average' menu items I think I've had in my entire life. 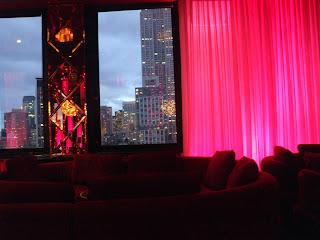 The view from our cushy spot. 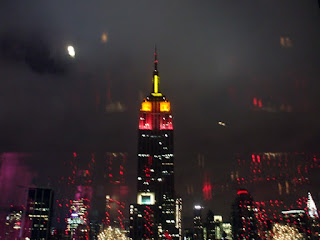 The view from the window. 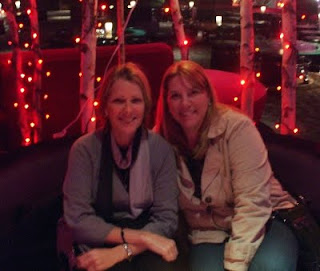 Chris and I - the camera was winding down for the day at this point - everything was blurry.

Once we were finished with dinner it was time for me to head home. I was full and happy and my legs hurt like crazy, but I have to say it was a wonderfully memorable day for me. Chris, thank you so much for an awesome day and New York, you still have it goin' on and always will.

I loved my visit to NYC - I'm reliving those moments! :))

Let me know when you want to come up to NYC again and we'll meet up! It seems silly that we STILL haven't met even though I come down to the Lehigh Valley from time to time. Oh, Transbridge... How I hate thee. ;-)

Give me just 'one more reason to hate you' (wink, wink). I am so happy for you, everyone deserves a 'Chris' in their lives that can read when someone needs a calgon moment and provides it. I hope you bought yourself one of those lollipops.....

Anne it looks like you had an amazing time! And thanks for snapping pix so we home-bound could share the fun!

But you know I was thinking of you the whole time! Sushi wasn't the same without you, big bro :)