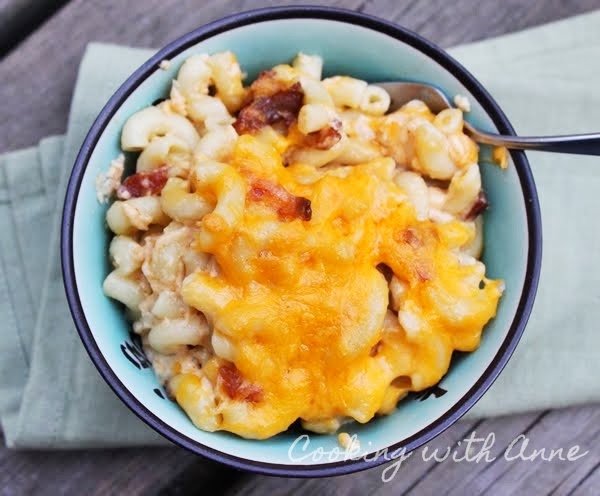 Our Favorite Macaroni and Cheese

I recall at one time thinking that evaporated milk and sweetened condensed milk were one and the same. Imagine that realization coming from attempting to substitute one for another. After that single incident, I shied away from evaporated milk, not really understanding what it was or why anyone would use it.

I started getting back into it quite accidentally; my mother was moving to a smaller home and cleared out her overfull cabinets, passing the contents on to me and my brood. Within the cans and boxes given to me were several cans of evaporated milk. I figured if mom used it, it couldn't be all bad and there must be some way to use it up.

I experimented and came to love it. It was cheaper than cream and healthier, too (twice the protein and calcium of regular milk) - but every bit as rich. When I used it for things like cream soups, baking pies or macaroni and cheese, there was no difference in performance between it and cream, but it was definitely creamier and richer than using milk. I now always have cans on-hand for things like my favorite salmon chowder and the kids' favorite macaroni and cheese. The fact that I like Carnation more than any other is par for the course here. I've used Carnation everything - including formula for my babies who needed extra help - since I've been old enough to purchase my own food.

My mother used it for pies most often, but the fact that it translates so well into savory dishes seems to have been lost on her. Here are two recipes using Carnation Evaporated Milk that are pretty near perfection. The first recipe, Loaded Potato Potluck Favorite, comes from the Carnation Holiday Cookbooklet. You can download it for yourself here: http://bit.ly/CEMholiday
These were awesome and didn't last very long at all. The green onion is optional, but I love the stuff, so there's no way I would leave it out. I think it added just the right contrast to the cheese and bacon, too. 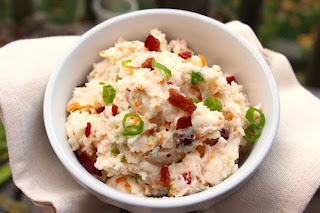 The second is our own favorite macaroni and cheese - see photo above. Using evaporated milk in lieu of regular milk does nothing but make this even better than usual. The cheese seemed to melt better in the evaporated milk and the overall result is heavenly.

1. Preheat oven to 350 degrees F
2. In a small saucepan heat evaporated milk gently just until hot. Do not boil.
3. Add shredded Monterey Jack cheese and stir until melted. Add salt and paprika and blend well.
4. Toss cooked macaroni with bacon and pour cheese mixture over all. Stir and pour into a greased 9x13 baking dish.
5. Top with cheddar cheese and bake for 20-30 minutes or until bubbly and just beginning to brown.

For more information about Carnation Evaporated Milk, check out the following links:

Coupons for product and stipend for recipes graciously provided by Carnation and Cassie Boorn of One2One Network. This is not a paid product endorsement.

Anything with bacon is good to me! I used evaporated milk in my favorite tuna noodle casserole, the one my mom always made.

About a year ago I, too, thought evaporated milk and condensed milk were the same thing. What a great recipe! I downloaded the booklet and will definitely try the quiche bites for our next party.

love the fact that you used evaporated milk. I used it in pancakes one morning when I ran out of milk....and yum!!!

After doing this project, I learned so much about Carnation. It will be a staple in my pantry from now on. Im definately going to try the potato dish from the cookbook.

I registered for livejournal so I could leave a comment here. I am a mom of seven also. It's a great club to be a part of.

I wanted to thank you for clarifying the difference between sweetened condensed and evaporated milk. Until today I thought they were the same thing, and like you had refused to use it. I need a good milk supplement because we live so far from town. I look forward to using the recipes you provided and giving canned milk another try.