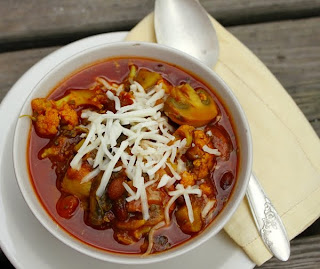 The soup I'm going to be sharing with you today is not just any soup. The recipe comes from my friend, Danny, the man to whom this marvelous concoction owes its existence to.

I made up a half batch of it today (and you'll see why I only made half - it's huge!) and the whole time I was putting it together I kept thinking that it seemed familiar, and it does. Back in the late 80's to early 90's (that's 1900's, kids) there was a soup that everyone in the world who was trying to lose weight made. It started with tomato juice and built up with veggies until it was a seething mass of who-knows-what. It wasn't bad overall, but it lacked any real flavor that would keep a person wanting more. It was rather bland, as soups go, and for all that was dumped into the pot, it really should have had more 'oomph' to it.

Enter Danny. I'll let you get the story in his own words in a moment, but - in a nutshell - he took a similar soup and morphed it into a very fusion-flavored thing that actually leaves you feeling full for longer than the requisite 30 minutes that other 'diet' soups give you.

This soup is a thing of legend among Dan's friends and acquaintances, and having not been shared until now, has been carefully guarded by Danny himself and I have been lucky enough to have him share it with me and then allow me to pass it on. I know there are people out there who have been waiting for this.

Without further ado - here's the scoop:

The story is that many years ago, my doctor put me on a very low sodium diet and, with my background as a sous in Philly, it got me back into cooking by necessity. I went back to complimenting flavors between acidic and sweet, savory and tart, etc.. Given that I needed something to fill me up, but not high-calorie, I started with a vibe of a "Hobo Stew," but without the meat. My brother had something similar in his fitness diet that seemed like a good idea, but I knew that I could blend some flavors in ways that would provide more flavor and health benefits. The idea was to take a big pot of water and start tossing fresh vegetables into it and see what happens. Personally, I use low sodium V8 and I like to toss in a few gulf shrimp at the end with a pinch of mozzarella cheese when serving, but it's great over rice, noodles or just plain, too.

Over the years, I found myself tweaking this without ever writing down what I'd done, but my doctor (who LOVES this soup, by the way) suggested that I offer the recipe to other patients online. The mix of sweetness, citrus, spicy, savory, and the ability to be seasonal made it right for anything from gumbos to curries to vegetable soup with barley so I began to cook it for friends as well. Once that happened, people began to demand the recipe and, given that I wanted to share it through someone I know and trust, I found my way to you.

I'm told that it needs to be shared and that's the nature of a good soup, I think. This, like so many soups, is one of those that gets better on the second and third days. My friends continue to say that my soup rocked their worlds and/or changed their lives (especially if they are patients of some specific care who all seem to be able to eat this with little modification), I'm very proud of this particular recipe. It is energizing, both filling and light at the same time, plus good for you. A cup in the afternoon, late at night, or as a meal in-and-of-itself. To me, it's just my soup.

Daniel East's Rock Your World Veggie Chowder
Most people THINK they may not like this...until they taste it. Don't look, just cook!
Printable Recipe

• Using a 8 qt or larger pot, pour in the V8 & water with heat on HIGH.
• Add all veggies (except ginger) and bring to a rolling boil.
• Stirring often, continue boiling until foam begins to appear.
• Add the OJ, vinegar & black beans.
• Once mushrooms have reduced, add all remaining ingredients & continue boiling/stirring for 1 hr until veggies are tender.
• Reduce to a simmer and cover. Once it thickens (approx. 1 hr.), check seasoning for taste.
• Continue stirring and serve while hot.

NOTE: DO NOT add too much pepper as it expands when heated and may get fairly spicey!
ALSO: Each time you heat and reheat, the mixture thickens and continues to break down.
ADD ONS: Great over brown rice or with a little shredded cheddar, shrimp and/or meat, etc.

sounds great to me...not sure why you thought we'd think otherwise...

how could a soup with so many mushrooms be anything but good!

all of it sounds good though.

I've been making tons of soups lately...most of them pureed.

this one will be good for the colder weather.

I didn't think anyone would anything but LOVE it! Glad you think so, too.

Wow, what a soup. I remember that weight loss soup from when I was single & this sounds nothing like it!

i have cooked this soup twice now and cannot get enough of it. definitely a great way to fill up with an incredibly tasty and healthy recipe. glad to see that Dan has shared it with the world and cannot wait to hear what everyone has to say about it once they've tried it.

wow this is THE soup!