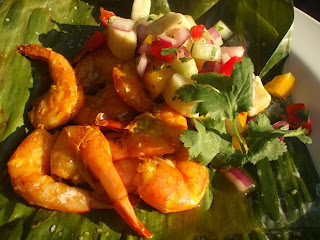 Inspired by this month's ingredients for the Royal Foodie Joust - turmeric, banana and honey - I came up with this. We just had this for dinner and it was summer-all-over. Ian ate more than his fair share and my brother-in-law, Tim stopped by and declared the salsa a hit. He balked at the name, but bent over the bowl and inhaled and quickly turned to me and said he would try it. He even told me to mention that he loved it.

I think it was very refreshing, and I love the earthiness of the turmeric with the shrimp. The flavor that the banana leaf imparts to the shrimp was just another delicious layer.

So, here's the recipe - roughly:

Rinse banana leaves and set aside. Heat oven to 400 degrees F.
Gently toast spices in a small pan - this works best before spices are ground, but still helps to boost flavor when they have been ground. Combine spices and garlic and make a paste. Toss with shrimp (I like the shell on, but you can remove it) until well coated. Divide shrimp between banana leaves and fold up into small packets. Set, seam side down, in a shallow pan and put into the oven. Bake for 10 - 15 minutes. Remove from oven and open each on a plate. Serve with banana salsa.

love the look of your blog, could this be featured on a seafood blog? just comment me back and let me know thanks Rebecca

Hi, Rebecca - it sure can! Thanks for asking :)

Nice and innovative recipe to use banana, honey and turmeric all together. You can check out a spicy shrimp curry in my blog, originally from Bengal, the eastern part of India from where I belong. Its called chingrir malaikari (couldn't put the link here)

This is a great Joust entry! Thanks so much for participating, Annie! :)