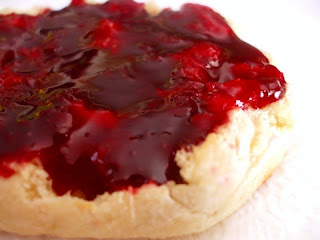 Crofter's Organic Superfruit Spreads - I had no idea what a superfruit was before this, and I'm still not sure I do, but it wouldn't make a difference to me with these spreads, they're so good it doesn't matter! Chock full of real fruit (a full pound in each jar!), tons of flavor and antioxidants like you've never seen before, you won't need another jam, jelly or preserve after you taste these. They are available in four different World-Traveled flavors:
We had these on toast and English muffins every morning and I used a jar of Asia Superfruit for these delicious Fruit and Grain Bars I made for Family.com. Perfect! Find a location near you that sells these - NOW.
Gourmè Mist™ Olive Oil and Vinegar Misters are not only healthy oil and vinegar alternatives and organic to boot, they're also great for the environment. These misters work with a pump-action cap that dispenses a continuous stream of product without using aerosols.

Swanson Natural Goodness™ Chicken Broth has 1/3 less sodium and is 100% fat free but there's no way you'd know either. I've been making my own chicken stock for years and this is as close as I've come to it in a prepared product. I used it straight up as a soup base and also to cook rice and the flavor waas right on. Anything better for you that also tastes good is something I appreciate.

Le Towelé™ - Lost your towel? Not anymore! This handy little invention makes it easy to keep your towel at your side at all times. My kids like to run off with my kitchen towels at every turn and this gadget has thwarted them and kept the towel on my side. Check out Le Towelé™ and many other fine products at ARGEE Corporation.

Looks so yummy sister. Have to try it :)

Hey Anne, thanks for the great recommendations, will have to check them out!

Hey not sure if you heard yet, but I started a discussion list for food bloggers! It's gaining momentum and I'd love it if you joined us (if you haven't already!)! All food bloggers are welcome, so if you know anyone else who would like ot join please pass it along! http://groups.yahoo.com/group/foodblogs/

This is a great site that you have here. i have a website myself where people can debate each other on controversial topics. After looking at my blog, I see that you definitely would have some insight. Just wanted to inform you of my site.

Keep up the good work. Maybe we can do a link exchange.