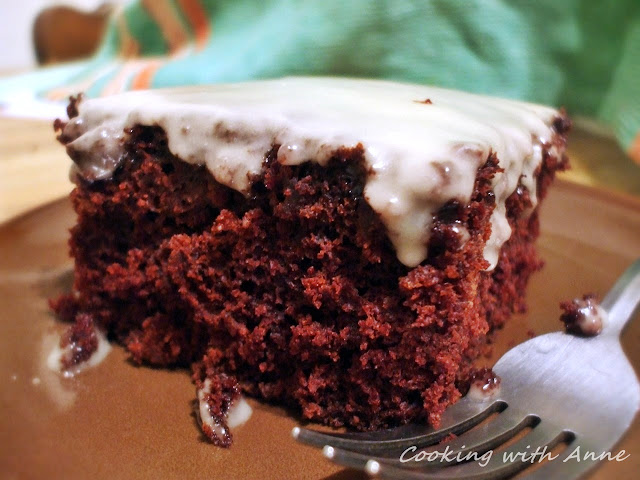 Long ago and far away when I was young my brothers and I had the good fortune of being nourished by wonderfully talented cooks: our mother, our step-mother and our grandmothers. All four went above and beyond the call of duty by making sure that we were not only getting decent nutrition, but that we enjoyed all that we ate.

When they weren't feeding us food that kept us healthy, they were doing very bad things, like feeding us too much Wacky Cake. Now, remember, in the 70's vegetarianism was just taking hold here in the U.S. and moms and grandmoms were still of the 'June Cleaver' variety; that meant dessert every night. Having been products of the Depression and World War II eras or, in the case of our mom and step-mom, having been fed by someone who was the product of the Depression and World War II eras, one of the more popular cakes to make was Wacky Cake.

Prepared in one pan without eggs, milk or butter, it was not only fast, but thrifty and filled the dessert slot as well as any time consuming 3-layer chocolate cake could. The origins of this are very unclear. There are thoughts that it sprung from rationing days when eggs and butter were scarce, but in all of the literature I've come across from that time, there is no mention of using vinegar and baking soda to leaven a cake. I'm sure it came about around that time, though, as other evidence points to it, but the earliest writings I've found in my own cookbook cache is in a cookbook dated 1956.

Whenever it was born, it's something I turn to again and again for several reasons. It's cheap (about $2 without icing not over $3 with), it's easy, it's fast and everyone loves it. No child ever had a clue that their cake was made from what seemed like a basic salad dressing. No, we saw moist and dark chocolate cake covered in white frosting and didn't care what it was made from. My own kids are the same. I think they each took turns looking a bit perplexed the first time they caught me making it, but they soon forgot what went on behind the scenes once the cake was in front of them.

This is the version I use, so often that I don't refer to a written recipe in fact, and the icing that follows is also the one I use most and a variation for anyone who would like a little something different.

This cake was originally meant to be baked in a 9x9 square pan, but we've since outgrown that. In other words, you can cut this in half just fine and still have a delicious cake. The sugar seems a bit hefty, but the price you pay for cutting back - a dry cake - isn't worth it to me. This is one of the moistest cakes ever and the sugar is the reason for that.

Mix flour, sugar, cocoa, baking soda and salt in a 9x13 pan.
Make three holes in the flour mixture.
In one put vanilla; in another the vinegar, and in the third the oil.
Pour water over all and stir well.
Bake at 350 degrees F until it springs back to the touch or a toothpick inserted near the center comes out clean - about 25 minutes.

Melt margarine and add vanilla and milk. Add powdered sugar until desired consistency - loose but spreadable. This thickens as it cools.

**As a variation, I add a teaspoon of ground cinnamon to the flour mixture and add a cinnamon chocolate buttercream icing to the top.

Cream butter until fluffy and add vanilla and cinnamon. Add cocoa and mix well. Add powdered sugar and milk until icing forms and is thick and spreadable.
Posted by Anne Coleman at 12:00 AM

This is great! Just what my family needs - a frugal, lowfat, and healthful option for dessert. Thank you, I can't wait to try it!!!

Hi!
I think your blog is very, very intersting and I already follow you. I'm waiting your visit.
http://amigadamoda.blogspot.com

It seems Wacky Cake is making a come back. This is the second recipe post I've seen in two days. I misplaced the other link but I'm saving this recipe "as we speak."

Thanks for the memories...

Check out my blog Anne, to get your instructions! bye!

I think I used to make that cake when my children were small. It seems like we called it "dump cake" I don't have the recipe any more, but I do remember making the three holes.

The recipe is great. I think my family will surely love it. Thank you.

Wacky Cake has been a staple in my baking arsenal for a long time. It's very popular in the food allergy community.

Just a quick note to let you know we made this cake tonight for dessert and LOVED LOVED LOVED it! The kids had a blast mixing it up in the pan, and we just topped it with whipping cream, but honestly, it didn't even need anything! Tender, Tasty and DELICIOUS...would never know there weren't butter and eggs in it! Thanks again!!!

Wow, this looks good! I was thinking of having a Happy UNbirthday party for the kids next week, maybe I'll make this.

Do anyone know the nutrition facts for this cake...I make it all the time but use Splenda instead of sugar so I was just trying to see how many calories or fat was in it. Best cake by far than any box type.

I am a longtime follower of yours from LOK...Anyway, made this cake yesterday and it's a big hit. Very moist and delicious. And it TOTALLY filled my pregnancy craving for cake. :)

Thank you, Kate! It's good to know when someone actually tries a recipe. I appreciate it!

My mother, born in 1918, called this War Cake. Milk makes it non-vegan.