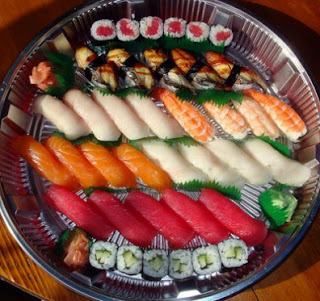 In the realm of 'Things Anne Has Not Yet Tried' not only was there authentic chow mein, there was also sushi. I, like many others, couldn't get past the idea of eating raw fish. It didn't matter that I had eaten raw ground beef as a child, there was something about raw fish that just didn't seem right. There were also the many warnings about parasites and bacteria and food borne illnesses to think about. My own daughters had sushi far before I had and told me how they would never eat sushi again (never mind that it was a stomach virus that made them sick, not the sushi). So, I had set myself against it. Maybe I would eat a California roll, but even then, how often did I frequent establishments that served sushi of any form, even the cooked variety?

Along comes my brother Bobby. He has been eating sushi for 20 years at least 2 times a week. To say he is addicted would be putting it mildly; he may also be pushing the boundaries of 'guilty pleasure' at this point. Nevertheless, he wrote a blog post about his love of sushi and I mentioned that we would have to go out and have some soon. That soon turned out to be the moment I mentioned it.

So, in a very non-typical for me fashion, I told dear hubby that I was going out -alone- to meet my brother and have sushi at a highly recommended local spot, The Other Fish. I figured that going with Bobby for my first sushi venture would be the smartest thing I could do; sort of like taking a food critic along to an opening of a new restaurant. He is so well informed about sushi that he often captures the attention of the sushi chef who finds himself unable to resist wanting to make something special for Bobby. I can understand that completely - when someone who really loves food comes along, I want to feed them until they're sated and happy.

I don't have a huge history of The Other Fish, but I do know they were first located on the South Side of Bethlehem where they were known as The Dancing Fish and both the staff and clientele have remained largely unchanged. Jay is still the Master Sushi Chef (billed as the only Japanese Master Sushi Chef in the Valley) and he's still cranking out some of the best sushi in the Valley. How do I know this? My brother said so. But Bobby isn't the only barometer for how great the food is at The Other Fish, just check out their Facebook page and you'll come across some very devoted fans. The love for this small hole-in-the-wall spot is near cult-like and understandably so.

The restaurant is small - cramped even - but that's part of the ambiance. I'm not one for austere and pristine settings where everything matches and it all looks as though it were steam-cleaned before being lacquered over and shrink-wrapped. I like the funky eclectic look they have going on, but once you start eating everything else takes a backseat to the food.

We had quite a plateful of sushi - Bobby ordered for us both, at my insistence, and explained each different type of sushi in detail. We started with the traditional miso soup which I've had many times and it was perfect - especially on such a cold evening. Then came the sushi; nigiri and maki which were tuna, salmon, fluke and one of Bobby's favorites and something he almost always has to order special, Tobiko with quail egg. He told me that many times he requests the quail egg and as many times is told that it's not available, so he was very pleased that they were able to grant his wish.

I have to admit that I stared at that quail egg and balked at the thought of eating it, feeling a little like Andrew Zimmern at that moment, but I gave in and was immediately hit with an understanding as to why Bobby liked it so much. We had red snapper with ponzu, the shrimp tempura roll and a specialty roll, the Tracy Roll: crunchy spicy scallops and tobiko. Bobby liked that so much that he ordered another and asked Jay to add avocado to the top which was fabulous. Bobby was really pleased with that, and so was I.

Bobby knows several Japanese words and is able to let the chef know that he has enjoyed his sushi. The chefs generally appreciate this and let Bobby know with extras like special pieces of sushi. Jay made one such piece of sushi for Bobby that had what he called 'a sort of squid salad' topped with a quail egg. Another thing that Jay whipped up for us and a trio next to us at the bar was fried salmon skin with a hot sauce that was so good we hated to leave any behind. It was superb.

Needless to say, I enjoyed myself very much and Bobby did as well. For a first-time sushi eater, it was the perfect spot to go; there was no chance of getting anything that wasn't perfection.

Check out The Other Fish at their page on Dine Indie or their Facebook page, where you can become a fan ... just like I did.

Email ThisBlogThis!Share to TwitterShare to FacebookShare to Pinterest
Labels: sushi, The Other Fish

I love sushi! Glad to hear you found your way to it! I gotta check out that spot you went to, never heard of it, thanks!

Glad you gave sushi a chance. I always turned my nose up at it too & then I moved to San Francisco where there were 13 sushi restaurants in my neighborhood alone, it soon became on of my favorite things to eat.

Kudos to you for trying sushi! I am a self confessed addict, my favorite is yellow tail, it has the most amazing texture :)

The Other Fish is most definately THE place to get sushi in the entire Lehigh Valley. I'm glad you started with the best for your first tasting!

I'm so glad you had a good experience. It sounds like you went with the right person. Sushi is addicting, and you had a wonderful first taste!

The Other Fish is the BEST sushi place in town. Dino and I love it! He even has a roll named after him. Glad you tried it! I still focus on the rolls only...sounds like you dove right in.

I was SOOOO jealous when he came home and told me he went out to sushi with another woman! LOL :D Jealous that I didn't get to spend time with you!!!! :D

Krista - LOL! You know, I was thinking - I know Bobby was my brother before he was your husband, but it was SO WEIRD being out with him WITHOUT you! Very surreal - I haven't seen Bobby without you in years and years. Next time, it's you and me!

There is a place on 3rd street by the Fahy bridge. I forget the name of it, but it's worth checking out. The tuna roll was fantastic!

Glad you had a good first experience, though!

Are you now a convert or will your first experience be your last?

My kids bullied me into tasting sushi -and I, a member of the generation taught that food had to be subdued before it could be eaten, loved it. Other Fish is the best! Nancy

Please, oh please understand that Sushi does NOT mean raw fish. Sushi is technically seasoned rice. What's added as "toppings" is tradionally seasoned vegetables. "Raw fish" is called sashimi. Sashimi can sometimes be put on sushi as could cooked tako (squid) or seaweed. Now, in the days of chez chic menus, people pay more for exotic sounding food names. Whatever floats your boat. I prefer paying $3 for a whole tray of maki sushi or inari sushi.

Wow.. this is looking great. I love sushi.