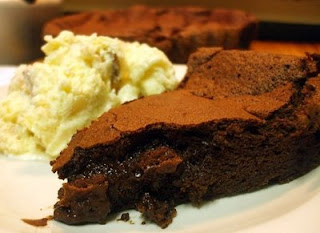 I make a version of this delicious flourless chocolate cake that we call Chocolate Mousse Torte here at home. However, I rarely make ice cream for several reasons. For a family our size it's expensive, I don't have an ice cream maker and I really don't like to play the 'check and stir' game all day long. I did it for this challenge, though and decided on an apple dumpling ice cream made with vanilla ice cream studded with apples, cinnamon, sugar and pie dough squares. Yum!

Here are the recipes:

1. Put chocolate and butter in a heatproof bowl and set over a pan of simmering water (the bottom of the bowl should not touch the water) and melt, stirring often.
2. While your chocolate butter mixture is cooling. Butter your pan and line with a parchment circle then butter the parchment.
3. Separate the egg yolks from the egg whites and put into two medium/large bowls.
4. Whip the egg whites in a medium/large grease free bowl until stiff peaks are formed (do not over-whip or the cake will be dry).
5. With the same beater beat the egg yolks together.
6. Add the egg yolks to the cooled chocolate.
7. Fold in 1/3 of the egg whites into the chocolate mixture and follow with remaining 2/3rds. Fold until no white remains without deflating the batter. {link of folding demonstration}
8. Pour batter into prepared pan, the batter should fill the pan 3/4 of the way full, and bake at 375F/190C
9. Bake for 25 minutes until an instant read thermometer reads 140F/60C.
Note – If you do not have an instant read thermometer, the top of the cake will look similar to a brownie and a cake tester will appear wet.
10. Cool cake on a rack for 10 minutes then unmold.

Ingredients
1 Vanilla Pod (or substitute with vanilla extract)
300ml / ½ pint / 1 ¼ cups Semi Skimmed Milk – in the U.S. this is 2% fat (or use fresh full fat milk that is pasteurised and homogenised {as opposed to canned or powdered}). Dharm used whole milk.
4 large egg yolks
75g / 3oz / 6 tbsp caster sugar {superfine sugar can be achieved in a food processor or use regular granulated sugar}
5ml / 1 tsp corn flour {cornstarch}
300ml / ½ pint / 1 ¼ cups Double Cream (48% butter fat) {in the U.S. heavy cream is 37% fat)
{you can easily increase your cream's fat content by heating 1/4 cup of heavy cream with 3 Tbs of butter until melted - cool to room temperature and add to the heavy cream as soon as whisk marks appear in the cream, in a slow steady stream, with the mixer on low speed. Raise speed and continue whipping the cream) or use heavy cream the difference will be in the creaminess of the ice cream.

1. Using a small knife slit the vanilla pod lengthways. Pour the milk into a heavy based saucepan, add the vanilla pod and bring to the boil. Remove from heat and leave for 15 minutes to allow the flavours to infuse
Lift the vanilla pod up. Holding it over the pan, scrape the black seeds out of the pod with a small knife so that they fall back into the milk. SET the vanilla pod aside and bring the milk back to the boil.
2. Whisk the egg yolks, sugar and corn-flour in a bowl until the mixture is thick and foamy. 3. Gradually pour in the hot milk, whisking constantly. Return the mixture to the pan and cook over a gentle hear, stirring all the time
4. When the custard thickens and is smooth, pour it back into the bowl. Cool it then chill.
5. By Hand: Whip the cream until it has thickened but still falls from a spoon. Fold it into the custard and pour into a plastic tub or similar freeze-proof container. Freeze for 6 hours or until firm enough to scoop, beating it twice (during the freezing process – to get smoother ice cream or else the ice cream will be icy and coarse)
By Using and Ice Cream Maker: Stir the cream into the custard and churn the mixture until thick (follow instructions on your ice cream maker)

Mix all ingredients together (we do this in a plastic pitcher and mix with an emulsifier hand blender-whisking works too).
Refrigerate for 30 minutes or longer
Mix in your ice cream maker as directed.


The cake turned out perfectly - I used a fluted tart pan and underbaked it slightly so that the center is closer to dense chocolate mousse than cake. Great challenge Dharm and Wendy - thanks!

I love the sound of that apple dumpling ice cream!

Great work on the DB challenge

Apple dumpling icecream sounds fabulous - I'd love to try that.

Perfect Anne! That looks so incredible and I love the ice cream flavor!!!

Oh my gosh! I am drooling:)

Looks so good- wish I had done this one!!

Super job on this challenge! I'm so glad you enjoyed it too Anne and I must say the ice cream flavour sounds fantastic!

Oh my gosh that ice cream flavor sounds so good!

The ice cream sounds Wow! I bet the family loved it. And as for the cake, you are a pro!

Great job on the challenge Annie! Looks great and I can bet your whole family enjoyed that one!

Good point on the cost of making ice cream -- definitely not something that fits the idea of homemade being less expensive! LOVE your apple dumpling ice cream idea. Oh my goodness, forget the cake and I'll take a bowl of that. YUM!

Your cake looks so delicious - looks much moister than mine was!

Drooling... but you always make me slobber all over myself with the tasty treats you show :)

LOVED the baked grit/egg recipe and will have to try it this week-end. Looked oh so yummy! Being the Southern Gal I am, grits are a weekly staple here :)