What's the number one thing kids miss while away from home at college? The food. My oldest daughter, in her second year at Kutztown University in Pennsylvania, can attest to that and tells me so often. Many times she calls home to find that we're having one of her favorite foods for dinner and she'll say, “I want to come home!”

Cassidy is one of my biggest fans, and as such she talks to her friends about my blog and my work quite often. She told me that her friends wanted to come home with her and have dinner. I wanted to do just that for quite some time and when it came time to submit a proposal for the January Foodbuzz 24,24,24 Event, I decided that a dinner based on comfort foods stepped-up a bit would be just the thing. We were all excited when I found my proposal was accepted!

I had Cassidy ask her friends ahead of time what their favorite comfort foods were and also which food they missed the most while away from home. There were the expected answers; mashed potatoes, macaroni and cheese and meatloaf, but I didn't want these kids to come here for the same-old-same-old, whether it was comforting or not, so I did things a little differently than usual and planned my menu around their favorites, but all with a twist 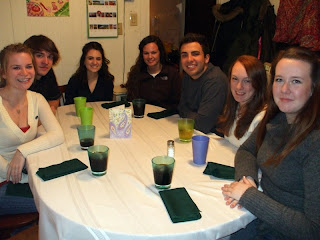 The Guests: L to R - Jamie, Chase, Jillian, Julianne, Artie, Shauna and Cassidy. Aren't they the best looking bunch of kids ever? I highly suspect those two handsome boys were the source of all the laughter.


The guest list was all sophomores – six from my daughter's college and one from another:

We covered eastern Pa and a little bit of New Jersey fairly well.


There are two guests I didn't have favorites for simply because they were late additions, or stand-ins, rather. They turned out to be great substitutes, though and I'm very glad they both came.

The night started with my 'servers' (a.k.a. Declan and Erin, two of my kids) seating everyone and getting drink orders. They took orders all night, making sure we weren't sending out food that anyone didn't want, and the smaller children even entertained from time-to-time. Dinner and a floor show, what more could you ask for?

The first course was two different appetizers, Halushki Pierogi and Macaroni and Cheese Soufflés with Bacon. The pierogi were made for Jillian, with a filling closer to Halushki (cabbage and noodles) than the traditional filling as one of Jillian's most-missed foods was Halushki. 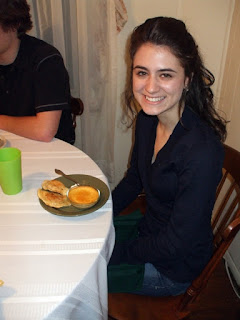 The Macaroni and Cheese Soufflés with Bacon were something I devised completely on my own. Shawna's favorite is mac and cheese and I wanted to do something a little more than just plain old mac and cheese, so I thought a soufflé would be good. I was dead-on, I'm told – that particular dish was an overall favorite for the evening.

Next up was the soup which was a Roasted Red Pepper and Cheddar with simple rolls. I didn't get much back when the dishes returned, and Artie said it was one of his favorites. 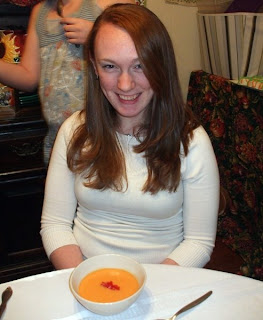 The salad for the evening was based on one of the guests who was not able to come. He said his favorite comfort food was macaroni salad, so I served Pasta with Pesto, Green Beans and Fresh Mozzarella. That was one of Jamie's favorites for the night. 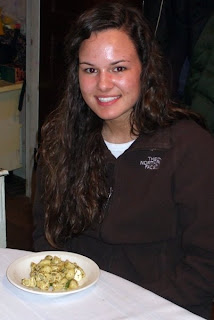 Julianne and Pasta with Pesto, Green Beans and Fresh Mozzarella

Then we served Triple Berry Sorbet. Yes, real sorbet. I know it's not considered a comfort food, but I also know these particular guests were looking for a little more than just home-cooking. I added this in and everyone liked it. The servers were back in the kitchen asking for their own, so I knew it was good. 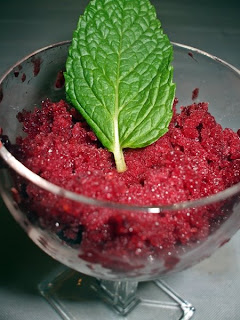 The entreé was rather large; Panko and Romano Crusted Chicken Filets, Mini-Meatloaves Stuffed with Spinach and Mozzarella, Chicken Pot Pies with Puff Pastry, Mashed Golden Baby Potatoes, Roasted Baby Vegetables and Chile Relleno Corn Pudding. I think by this point the guests were all a little full, but as far as I could tell – between them and my own family – the chicken and meatloaves were the stand-out here. My second-oldest daughter, Megan, was playing the tri-role of server, photographer and guest – covering the empty spot left by the 8th guest – and she was in the kitchen asking me to send her entreé out with smaller portions because she was so stuffed at that moment. 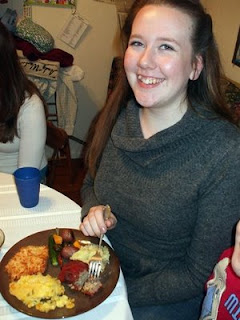 Cassidy and a little bit of everything! 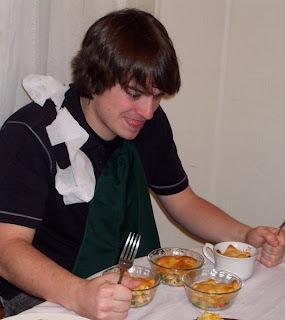 Full or not, there was dessert to be had, so without delay the dessert tray of Chocolate-Crusted Chocolate Tarts, Chocolate Covered Cheesecakes and Carrot Cakes was set out for everyone to choose from. As can be expected, the two chocolate desserts were the hits and at that point I suspect everyone was ready to burst. 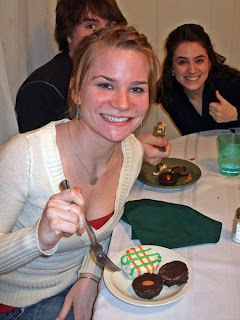 Jamie and the triple-threat

I didn't make my way out of the kitchen all too often; both from wanting the guests to be able to enjoy themselves without 'mom' checking on them and also the fact that I'd just rather stay in the background and watch everyone have a good time. From what I could tell (lots of hysterical laughter going on), I think they did.

I told them I'd have a dinner party a week if I could afford it and I do hope to do this again sometime soon for the kids who missed out this time. I really enjoyed meeting Cassidy's friends, and being able to feed people, no matter who they are, is always fun for me, so for all of your thank-yous, kids – I must say, Thank You, back.

A couple other Thank Yous go to all of my children for being a part of this and helping out with things; to my mother-in-law, Pat for loaning us several very necessary items without which the night would have been a disaster (read, tablecloth, napkins, chairs and sorbet cups) and several of my friends who answered polls for me, helping to set the menu.

The Recipes
------------------
One thing you know if you read here often is that I am a non-recipe type cook. I have them and I post them, but I rarely ever actually use them. So, when it comes time to share with others what I've created in my kitchen, sitting down to type it all out can be painstaking.

I've linked recipes that I've already posted or gotten from elsewhere (some have slight changes made that I'm hoping are obvious: the carrot cakes were done in large muffin tins, the pot pie has a puff pastry top-crust etc.) but here are the rest. For the roasted baby vegetables, that was a simple toss with olive oil, garlic and rosemary before being baked until done. The chicken was simple filets in a basic breading using equal parts panko and grated Romano cheese. I've done my very best to get it all down, but if you have questions, please don't be afraid to ask.
-------------------

Make a well in the center of the flour. Add eggs, water and salt into well. Mix together from the outside in and knead until smooth. Cover and let stand for 10 minutes.
Divide dough into workable pieces and roll thinly with a rolling pin or pasta machine. Cut with a 3” biscuit cutter and fill each with desired filling before folding in half and pinching edges to seal. Drop into boiling salted water and cook until they float. Fry in butter or serve as-is.

Heat butter in a heavy skillet and add onion and cabbage. Cook until soft and golden and all liquid has evaporated. Season with salt. Combine mashed potatoes and cabbage mixture until well blended. Use to stuff pierogi skins.

Heat butter in a saucepan until melted. Add flour and mix well. Pour in milk slowly, whisking all the while. Blend egg yolks well and temper with the milk mixture. Once yolks are tempered, add back into the remainder of the milk and whisk well until thickened. Remove from heat and add salt and cheese. Cool to room temperature. Once cooled, whip egg whites until stiff. Stir bacon bits and acini pasta into the cheese sauce. Fold egg whites carefully into pasta and cheese. Pour into well-greased ½ cup capacity soufflé dishes. Set filled dishes into a cake pan and add water to the pan until it reaches halfway up the sides of the soufflés. Bake in a 350 degree F oven for 30-40 minutes or until puffed and golden.

Combine all and pour into a greased casserole dish. Bake in a 350 degree F oven for 30-40 minutes, or until golden on top.

Blend everything until smooth. Strain to remove any seeds. Put into a 9x13 cake pan and freeze. Scrape with a spoon and put into small dishes for serving.
Posted by Anne Coleman at 1:08 PM

What a great idea for your 24/24/24!!! I love how everything in your life is centered entirely around your family and how much they love you for it!!! What a wonderful theme!

Wow! You cooked up a storm! I would of filled in for one of them!! Everything looks delicious!

What a fantastic Mom and Chef you are.And I have to say this was a original 24/24/24. Those kid will remeber this special meal for a long time.And I'n kinda new, but that was reaaly huge and nice of your husband to get involved.

What a wonderful idea, Anne! Those kids must have been in 7th heaven with all that yummy home cooking! You rock!

Anne, great idea to treat and feed your daughter and friends...they now have lots of fuel for good studying.

Perhaps you'll spark their interest in cooking for themselves a little more, a little better.

Congrats on your 24 Dinner!

Oh my gosh what a meal, you've ruined them for cafeteria forever

Anne, what a wonderful evening for those lucky guests. I am sure they enjoyed all the food and a happy family evening. You rock!

What a perfect choice for this dinner. I love the beaming faces on everyone, and that tells everything about your menu. What a lot of work! My back is aching just thinking about it. Congrats to you, Annie!

Excellent!! I'm sure that the dinner was great for those students, and very rewarding for you - and your servers.

That was quite an undertaking!

That'a a lucky bunch! I hope they didn't all come in the same car...

Congratulations on your 24, 24, 24 dinner. It must've been really special to cook your guests' favorite comfort foods. How cool is that!

Nate -n- Annie - I can't wait until they're all posted so I can see them all - yours looks fabulous!

What a great post! You see as I have that when your kids go to college,you really don't lose one, you gain a lot of friends- especially when you like to cook!

Wow! And the mom of the year award goes to...

I'll have what Chase is having.

I want it all.

Yum. That looks like quite the spread. What a nice treat! Glad to hear your husband was able to help out. I hope he continues to have a good recovery.