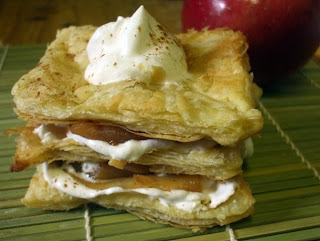 This past week's Top Chef challenge was to come up with "New American" cuisine to be served at Tom Colicchio's Craft restaurant in NYC. There seemed to be some confusion as to just what New American may mean, but my personal feeling is that New American is more fusion than anything else.

America has become such a melting pot (wasn't it always, though?) and expressing that through food really shouldn't be so complicated. I admit to patting myself on the back when Rhadika's dessert wontons were well-received, because I had just done similar a few weeks ago at Family.com, sans the mousse. While Carla's apple dessert was obviously well-liked, I can't help but think I'd have done it differently.

What would I have done? Well, I think the French Napoleon crossed with the classic American apple pie and a Mexican dulce de leche would be about perfect - and I have to say, they were!

Bake pastry squares according to package directions until golden brown. Set aside.
Melt butter in a skillet and add apples, brown sugar and cinnamon. Cook until apples are soft and lightly caramelized - about 10 minutes. Heat dulce de leche and keep warm. Add powdered sugar to cream and beat until stiff peaks form.

Drool drool drool I absolutely love the look of this. Apples and dulce de leche are a perfect combo and then there's the pastry! Great dish!

Yum. Apples and dulce de leche! It doesn't get much better!

Everytime I come visit, I just about slobber all over myself... and it ain't even 9 am yet. I loved all your recipes. They looked and sounded delish! :)

Wishing you and your family a wonderful Thanksgiving :)I'd just about give an eyeball to sit at your table~

you know the first time I was in Argentina with Eduardo, I tried to convince him that we should import Dulce de leche as a business. he told me I was nuts... That was in 1998 wish we would have done it!