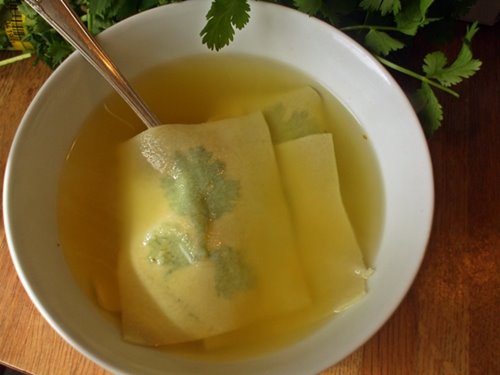 Pasta is such a diverse and widely consumed product that many people have no idea how easy it is to make your own. Pasta is also so cheap that many people wonder why one would make their own. For myself it's a feeling of accomplishment. I've always enjoyed making something that most people think can only be store-bought: cream puffs, wonton soup, fortune cookies.

The first time I ever made pasta with a machine rather than rolling it out myself was in school. Every pasta dish that was served at the school restaurant was made from fresh pasta. Making pound after pound was a bit tedious, but worth it.

Making your own pasta is like making anything else homemade; you get to be in control of what goes into it. Whole egg or egg white, salt or no salt, semolina flour or all-purpose flour. Water or not, oil or not.

Most store-bought pastas are made from semolina flour - a flour made most often from durum wheat. It's usually more coarse than standard all-purpose flour, so many people mix the two for pasta making. I've made pasta from all semolina and from half and half and I prefer the latter. All semolina makes a very stiff dough.

Here's the recipe based on what I made last week.

I don't usually add salt to my pasta, but I was making quadrucci, which are rather large, and wanted a little more flavor because they were being served simply, in broth.

Combine flours and salt and make a well in the center. Drop 3 eggs into the well and start mixing them into the flour until a stiff dough forms. If you are making pasta on a very dry day you may want to add a tablespoon or so of water to the eggs. Cover the dough and let it stand for 10 minutes.

Roll out or run through a pasta machine and cut as desired.

Fresh pasta cooks faster than its dry counterpart, so you need to keep an eye on it as it cooks. As with dry pasta, timing depends on the size and shape of the pasta.

I made quadrucci with herbs encased in the center of each. It makes for a very pretty presentation and isn't very difficult to do. The photo above is the finished quadrucci in broth.

The making of pasta: 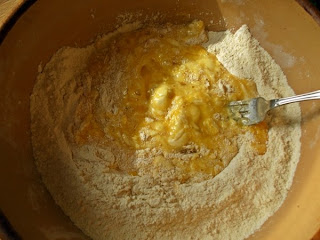 Stirring together egg and flour. 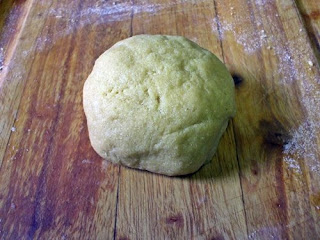 Dough at the proper consistency and ready to rest. 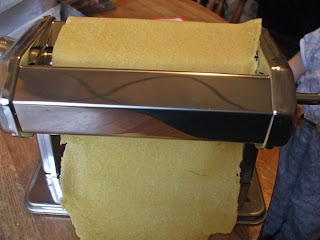 Run dough through each setting twice starting with the widest first - number 1. 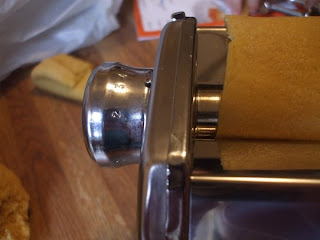 Turn the dial to the next number and run the dough through again - twice. Do this until you reach the desired setting. I like number 7. 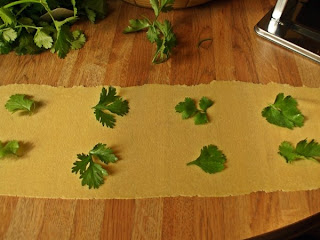 Lay very dry flat-leaf herbs on half of the sheet of pasta. Make sure to space them well, they will expand in size once run through the machine again. 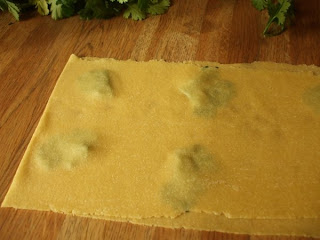 Fold the other half of the pasta sheet over the herbs and press down lightly so they don't move when transferring the sheet to the machine. 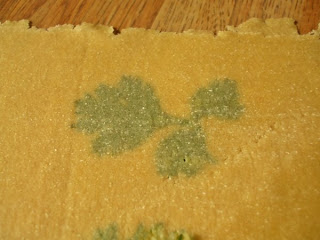 Run the pasta sheet through the machine on the number just before the one you decide on. Run it through one more time on the correct setting. For example, I wanted a number 7 thickness, so I ran the dough through 6 first and then through 7. This is the way the sheet should look when finished. Cut into squares with an herb in the center of each square. Cook in boiling stock until done. 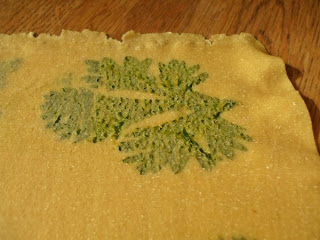 This is an example of quadrucci with herbs done the wrong way. Any moisture on the herb at all will cause the pasta to tear, resulting in exposed herb. All is not lost, however! 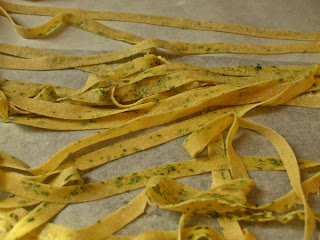 Run the damaged dough through the machine several more times so the herbs distribute themselves throughout and then cut it to a desired shape. I made fettuccine with mine. 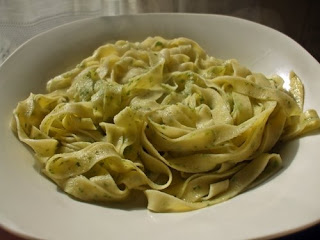 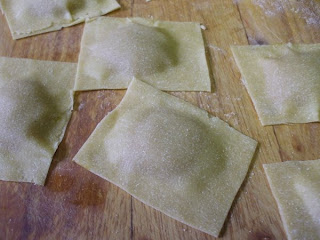 These are ravioli made with a full sheet of pasta. 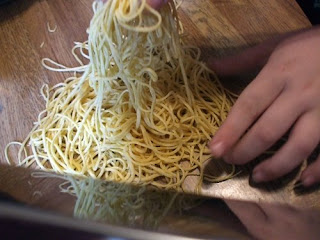 This is thin spaghetti the kids helped to make.

All-in-all, not difficult! It helps to have a machine to get the dough to the right thickness, but you can roll and cut pasta by hand, as well.
Posted by Anne Coleman at 11:14 PM

I love the way the pasta looks with the parsley in it! I think its time we dragged out the Kitchen Aid Pasta attachement

I've got the pasta attachment for my kitchenaid and have never used it...but after reading your post I think I must get it out of the box and give it a go. Your pasta is beautiful! I love the fresh herbs.

Looks like professional pasta! When I have more space, I think I may steal my mom's pasta maker. She never really uses it anyways.

I love making pasta, especially ravioli. My friend Debbie and I have an end-of-summer pasta and sauce making tradition. It's a sight to behold -- a few of our kids turning a tomato press crank on one side of the kitchen and a few manning the pasta machine on the other! Nothing more magical than watching ribbons of dough turn through a pasta press. Thanks for the beautiful post!
Alison

I've always wanted to know how to make pasta. After reading your instructions, I think I'll brave it and give it a try. I always thought you HAD TO HAVE a machine but now I know it can be done without.

i am eating lasagna made with homemade pasta as i read this post!i have never heard of this beautiful pasta! i look forward to making it soon :) thanks for the awesome post!

Lovely, a work of art!

Frank - that's a huge compliment coming from such and Italian Master!

Before, i thought there's nothing special with homemade pasta, until i tasted a homemade zitti pasta in gorgonzola and bechamel in an Italian Restaurant run by Italian Priests and Chefs here in the Manila. There really is a big difference. I might enroll on their crash course pasta and pizza lesson.