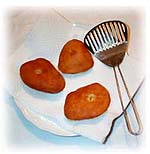 Today is Fastnacht Day in Pennsylvania. We also call it donut day. There's a bit of a controversy here this year as the local newspaper asked for healthier recipes for Fastnachts and the older women railed against it~a must read at mcall.com. Mcall.com has stated they are having technical problems getting today's edition up and running so I'll get back to you on it!

Lent begins on Ash Wednesday, March 1 this year. In Pa Dutch country, Shrove Tuesday, the day before the start of Lent, is known as "Fastnacht Day." The Pennsylvania Dutch celebrate Shrove Tuesday by eating yeast raised potato doughnuts, or "Fastnachts". The name "Fastnacht" is German for "Fast Night." In other words, the idea is to eat whatever you want today, before
the fast begins tomorrow!

These are traditionally cooked in lard, which many of the old-timers still do.

Fastnachts
Makes about 20 to 24 Fastnachts, depending on size.
Printable Recipe

Scald the milk. In a large mixing bowl, combine the scalded milk with the mashed potatoes. Add 1/2 cup sugar plus the margarine. Mix with an electric mixer. If the mixture is still warm, cool to about room temperature before proceeding with next step. Dissolve the yeast and 1/2 teaspoon sugar in barely warm water. Add to the potato mixture and mix well. Add 2 cups flour and mix again. Cover with a towel and let rise for 25 minutes.

Add the salt and beaten egg to the mixture. Add 4-1/2 cups flour, stirring it into the mixture with a large spoon. Turn onto a well floured board and knead for about 3 to 5 minutes. Add a small amount of extra flour if necessary so the dough can be handled without sticking to your fingers. Grease a large bowl. Place the dough in the greased bowl. Cover with a thin towel, and let rise in a warm, draft free place for about 2 hours or until it is at least double in size.

On a lightly floured surface, roll the dough 3/4" thick. You can use a doughnut cutter to cut the dough or cut as typical Fastnachts - Cut the dough into 3" to 4" wide strips, then cut the strips into 3" to 4" pieces. To allow the center of Fastnacht to fry completely, cut a small slit in the center of each piece, using a sharp paring knife. Arrange the pieces of dough, about 1-1/2" to 2" apart, on large wax paper lined trays. Cover each tray with a thin towel. Place the trays in a warm place for 45 minutes to an hour, or until the dough pieces have raised to about double in size.

Heat the shortening to 365º. Deep fry until both sides are golden brown, turning one time. Drain on white paper towels. Cool completely before serving. Store in a covered, airtight container.

This recipe can be doubled with no change in preparation directions.

To use this raised doughnut recipe, for glazed doughnuts: Beat together: 2-1/2 cups confectioners' sugar, 4 tablespoons margarine and 1 teaspoon vanilla. Add enough milk to make a thin glaze. Drizzle the glaze over the slightly warm doughnuts or dip the doughnuts in the glaze.

All this talk of donuts and sausage has got me drooling and slobbering. Laisser le bon rouleau de temps!

Im aching to try this, just have to get some yeast, im thinking just any old oil to deep fry it?, but as I dont have an oven, deep-frying is a go-go, and i havent used yeast before, well at home as a kid but not on my own, so im thinking of shopping!!! and well the history to this recipe I love to read about, but Im afraid wont be able to follow the tradition, will just have to enjoy tuckin' into some sweets!

I celebrate Pancake Day instead of Fastnacht Day since I can only get fastnacts from Giant (supermarket) and they aren't that good. When I first moved to this area, I had some really good fastnacts but that was years ago. I'd make my own but I don't have the time. Pancakes are easier.

I just noticed you lived in Bethlehem. I 'lived' in Allentown for 11 weeks training for this job and we all hung out at a brewery pub in Bethlehem one night. I don't know how I would feel about living in that area permanently but we had lots of fun there for 11 weeks.

Paula, I am right down the raod from the Brew Works and we love it there.

Allentown is a different world completely even though it's right next door.

I honestly prefer to live elsewhere (Mi. or In.) but Bethlehem is still ok for the most part.

I shop Giant all the time and didn't realize they have fastnachts-I always make my own so I guess I wasn't looking anyway ;)